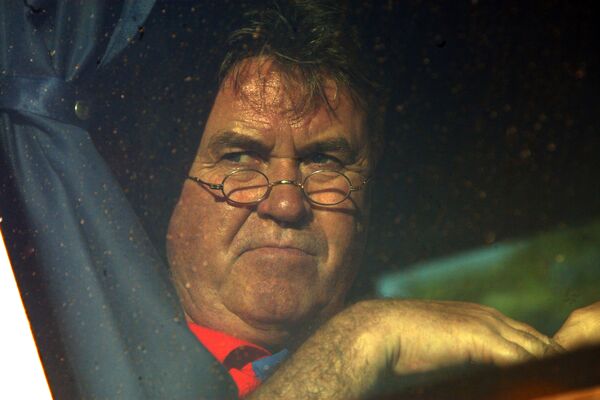 Guus Hiddink is hoping that his Russian side will force Germany to achieve qualification for the 2010 World Cup in a play-off tie.

MOSCOW, October 6 (RIA Novosti) - Guus Hiddink is hoping that his Russian side will force Germany to achieve qualification for the 2010 World Cup in a play-off tie.

Russia face Germany in Moscow on Saturday in the weekend's biggest European qualifier. Victory at the Luzhniki stadium will see Andrey Arshavin and teammates leapfrog the Germans into first place in Group 4 and an automatic qualifying spot for South Africa.

Russia's final game of the qualifying campaign is away to Azerbaijan on October 14. Germany host Finland the same evening. The best eight second-placed teams in the groups play off against each other in November.

Speaking to journalists after a training session at the Luzhniki on Tuesday, Hiddink said "It's going to be difficult because the Germans always qualify, directly, or hopefully now, through the back door."

As with the November 2007 2-1 win over Steve McClaren's England, demand for tickets has been phenomenal, with the Russian FA running a lottery to decide allocation.

Hiddink has a number of selection problems, with his main headache being whether or not to start with Tottenham Hotspur's Roman Pavlyuchenko, two-goal hero of that famous win over England.

Pavlyuchenko, with five goals, is Russia's leading scorer in the qualifiers, but has played less than half an hour of English Premier League football this season, kept on the bench by teammates Robbie Keane, Peter Crouch and Jermain Defoe.

Chelsea's Yury Zhirkov is also lacking match practice, with the former CSKA Moscow player as yet unable to force his way into the first team after missing the start of the season with injury.

"It's nice to have the boys back," Hiddink also said. "There is no injury news, everyone is fit."