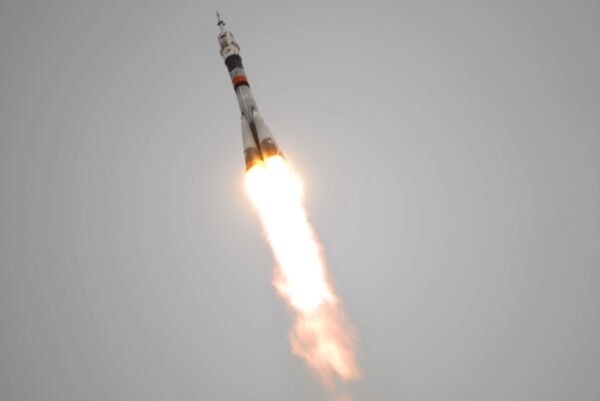 © Sergey Kazak
/
Go to the photo bank
Subscribe
The U.S. firm Space Adventures said on Friday it will be able to send two space tourists into orbit on Soyuz spacecraft from 2012 onwards.

KOROLYOV (Moscow Region), October 2 (RIA Novosti) - The U.S. firm Space Adventures said on Friday it will be able to send two space tourists into orbit on Soyuz spacecraft from 2012 onwards.

Space Adventures has been authorized by the Russian Federal Space Agency Roscosmos to select and contract candidates for space tourist trips.

"We have been working on this project for a number of years. Each Soyuz will carry two tourists and a professional astronaut. One of the tourists will have to pass a year-and-a-half training course as a flight engineer," said Sergey Kostenko, the head of the company's office in Russia.

The official said Russia's RSC Energia corporation has the capacity to build five Soyuz spacecraft per year instead of four, meaning that Space Adventures will be able to use at least one Soyuz for space tourism purposes.

"The International Space Station (ISS) program requires four Soyuz spacecraft per year, and we have been informed by RSC Energia that they will be able to increase the annual production to five spacecraft," Kostenko said.

He added that Space Adventures would pay for the construction of the spaceship, the launch services and the salary of a Russian cosmonaut as crew commander.

The official also said the company already had a number of candidates who were willing to pay for trips into space, including Russian-born American billionaire and Google co-founder Sergey Brin.

At present, the price of a 10-day trip to the ISS for a tourist is estimated at about $35 million.

Space tourists started flying to the International Space Station in 2001. Dennis Tito, an American businessman and former NASA scientist, became the first space tourist when he visited the ISS in 2001. He was followed by South African computer millionaire Mark Shuttleworth in 2002, and Gregory Olsen, a U.S. entrepreneur and scientist, in 2005.

Guy Laliberte, the Canadian founder of entertainment company Cirque du Soleil, arrived at the ISS on Friday and will stay on board until October 10.