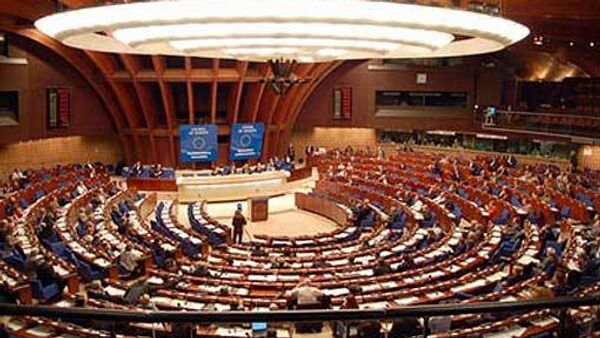 Subscribe
International
India
Africa
The Parliamentary Assembly of the Council of Europe voted on Thursday to reject Georgia's motion to deprive Russia of voting rights over last year's conflict in South Ossetia.

STRASBOURG, October 1 (RIA Novosti) - The Parliamentary Assembly of the Council of Europe voted on Thursday to reject Georgia's motion to deprive Russia of voting rights over last year's conflict in South Ossetia.

Georgia had proposed stripping Russia of its voting rights in the organization for failure to fulfill a PACE resolution demanding Moscow retract its recognition of the former Georgian republics of South Ossetia and Abkhazia as independent states following the conflict in August 2008.

The Georgian delegation demanded Russia cancel its decision to recognize South Ossetia and Abkhazia and withdraw its forces to the pre-war positions. The Georgian lawmakers said they would press ahead with their motion at the winter session.

"We will continue raising this issue and discussing it in the future," lawmaker Giorgy Targamadze said after the vote in Strasbourg.

An independent report commissioned by the EU and released on Wednesday blamed Georgia for starting the conflict with an unjustified attack on South Ossetia, but said Russia's response was excessive. Russia expelled Georgian forces from South Ossetia and recognized it and Abkhazia two weeks later. Nicaragua and Venezuela have also recognized the republics' independence.

Tbilisi severed ties with Moscow, calling South Ossetia and Abkhazia occupied territories, as Russia, which had maintained peacekeepers in the regions since the 1900s post-Soviet conflict, built up its military presence there after the five-day war.

PACE urged Russia on Tuesday to give EU monitors unrestricted access to Abkhazia and South Ossetia before the end of the year.