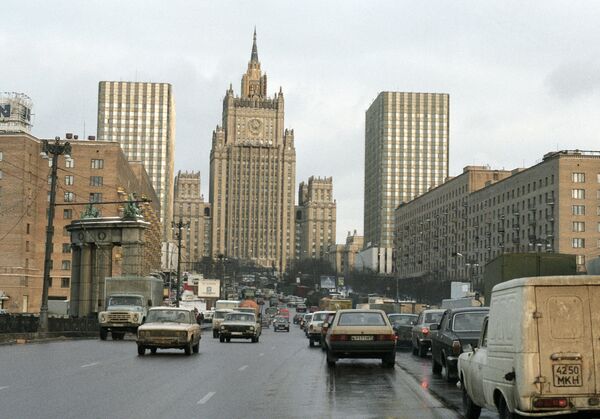 © RIA Novosti . Runov
/
Go to the photo bank
Subscribe
Russian officials and politicians welcomed the EU-commissioned report on the Russia-Georgia war last August, dismissing its criticism of excessive use of force.

MOSCOW, September 30 (RIA Novosti) - Russian officials and politicians welcomed the EU-commissioned report on the Russia-Georgia war last August, dismissing its criticism of excessive use of force.

The Foreign Ministry highlighted that the report, prepared by a Swiss diplomat in cooperation with European military, legal and history experts and released on Wednesday, blamed Georgia for the start of the conflict.

"Any reasonable person would draw a core conclusion from the report that aggression against South Ossetia on August 8, 2008 was launched by Georgia's current leaders," the ministry said in a statement.

Georgia said it attacked its breakaway region to prevent Russia's invasion of the Caucasus state.

But the ministry pointed to what it called a series of ambiguous statements in the report, including on Russia's disproportionate use of force and at the same time the acknowledgement of the legality of the retaliation.

The report said Russia's response to the Georgian aggression was "legal," as the initial military operations were of a defensive nature, but subsequent Russian actions "went far beyond the reasonable limits of defense" and were "in violation of international law."

A senior Russian lawmaker also hailed the acknowledgement of Georgia's responsibility for the beginning of the conflict and dismissed accusations of excessive use of force as a result of pressure from Georgia's Western allies.

"The main positive meaning of the report is that it calls things by their proper names," Konstantin Zatulin said.

"It is important as it cuts the ground from under the feet of those who want to portray the conflict as Moscow's plot against democratic Georgia or a provocation staged by Russia's military and security forces," he said.

He drew a parallel to the U.S.-led operations in the former Yugoslavia, Iraq and Afghanistan, saying Western powers were never condemned internationally for using military force disproportionately.

Germany's Foreign Ministry thanked the independent commission for their investigation into the causes of the conflict and said it showed that the conflict must not be repeated.