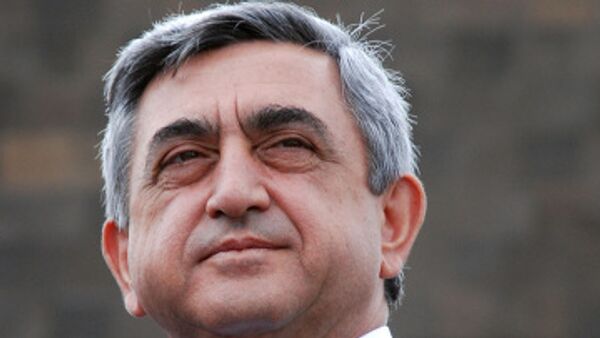 Turkey closed its border with Armenia in 1993 in a show of support for Muslim ally Azerbaijan, following a bloody conflict over Nagorny Karabakh between the two ex-Soviet republics. Ankara has also demanded that Yerevan drop its campaign to have the mass killings of Armenians by Ottoman Turks in 1915 internationally recognized as genocide.

Turkey and Armenia reached an agreement early in September to start "political consultations" on re-establishing diplomatic relations and reopening borders. The negotiations were mediated by Switzerland. The two countries agreed to a "roadmap" to normalize their relations under Swiss mediation this April.

"No one has put pressure on us and no one forced me to invite the Turkish president to Armenia," Sargsyan said at a meeting with the Public Council, which has accused the president of giving into international pressure in agreeing to the talks.

The Public Council was created by the president in 2009 and its members are also appointed by the head of state.

Public Council members have claimed there are preconditions in recent documents signed by both countries that are detrimental to Armenia's interests.

Turkish President Abdullah Gul first visited Yerevan, the capital of Armenia, last September to watch a football match between the two countries in their qualifying group for the 2010 World Cup. The move was dubbed "football politics" in the world press.

Sargsyan, who is expected to travel to Turkey on October 14 to attend the return match, previously said he would go if the border had reopened or if Turkey has lifted its economic blockade of landlocked Armenia.