Russia tests Indian fighter jets on board its aircraft carrier 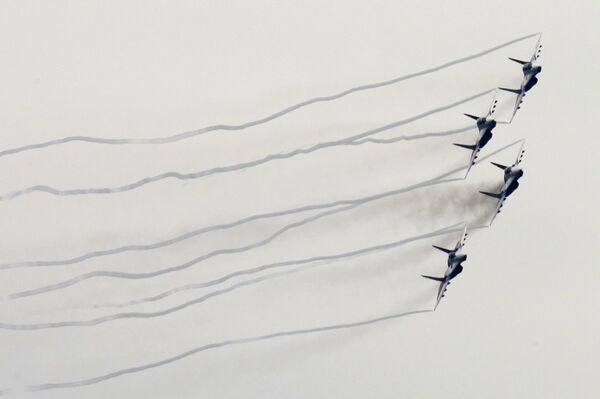 Russia's MiG aircraft maker said on Tuesday it has successfully tested on board the Admiral Kuznetsov aircraft carrier four MiG-29 carrier-based fighter jets due to be delivered to India.

MOSCOW, September 30 (RIA Novosti) - Russia's MiG aircraft maker said on Tuesday it has successfully tested on board the Admiral Kuznetsov aircraft carrier four MiG-29 carrier-based fighter jets due to be delivered to India.

Russia and India signed a contract on January 20, 2004, stipulating the supply of 12 single-seat MiG-29Ks and four two-seat MiG-29KUBs to India as part of a $1.5 billion deal to deliver the Admiral Gorshkov aircraft carrier, currently being retrofitted in Russia for the Indian navy.

"During the tests on September 28-29, the MiG-29K and MiG-29KUB fighters conducted several take offs and landings on the deck of the [Admiral Kuznetsov] aircraft carrier in the Barents Sea," the company said in a statement.

Admiral Kuznetsov is the only aircraft carrier in the Russian Navy.

The two MiG-29Ks and two MiG-29KUBs were officially transferred to India earlier this year. They were inspected by Indian technical experts and used in a five-month flight training course for the Indian pilots.

The aircrafts are expected to be delivered to India in mid-October.

Meanwhile, Russia and India are still negotiating a new deal on the completion of the Admiral Gorshkov overhaul.

Russia has pledged to finish the Admiral Gorshkov's overhaul as soon as possible and deliver it to India in 2012 if the additional $1.2 bln funding is provided by New Delhi.

After modernization, the carrier will join the Indian Navy as INS Vikramaditya, and is expected to be seaworthy for 30 years.