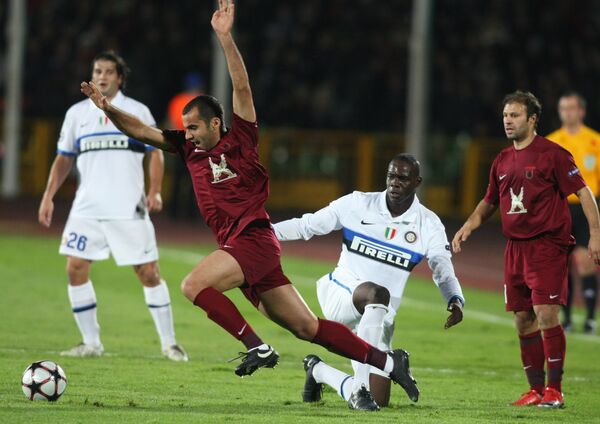 © RIA Novosti . Iliya Pitalev
/
Go to the photo bank
Subscribe
Russian champions Rubin were unable to finish off a ten-man Inter Milan in the Tatar capital of Kazan on Tuesday evening, drawing 1-1 in a Champions League game they will feel they should have won.

MOSCOW, September 29 (RIA Novosti) - Russian champions Rubin were unable to finish off a ten-man Inter Milan in the Tatar capital of Kazan on Tuesday evening, drawing 1-1 in a Champions League game they will feel they should have won.

After losing 3-1 to Dynamo Kiev in the Ukrainian capital in their debut Champions League tie two weeks ago, Rubin welcomed the Italian champions and Europe's most prestigious club competition to Kazan.

As in Kiev, it was inspirational Argentinean star Alejandro Dominguez who opened the scoring, cutting through the Inter defense to shoot home powerfully in the 11th minute.

Inter were level 16 minutes later though, Dejan Stankovic powering a header past Sergei Ryzhikov after being left unmarked by the Rubin defense.

Rubin stepped up the pressure in response, and when Inter's Mario Balotelli was sent off for a second yellow card offense in the 60th minute, Rubin swept forward in hordes, at times looking like they had a two or even three man advantage.

Aleksandr Bukharov and Aleksandr Ryazantsev both failed to take decent chances before captain Sergei Semak saw his shot come back off the post in the 81st minute.

While Inter and coach Jose Mourinho will be pleased with the point, Rubin trainer Kurban Berdyev regretted the missed chances.

"I'm pleased with the way we played, but disappointed that we dropped two points," he told Russia's NTV + channel.

"We played for the win," keeper Ryzhikov told the channel. "We just couldn't finish Inter off."

Rubin travel to Spain for a match against European champions Barcelona on October 20 before hosting Lionel Messi and teammates on November 4.