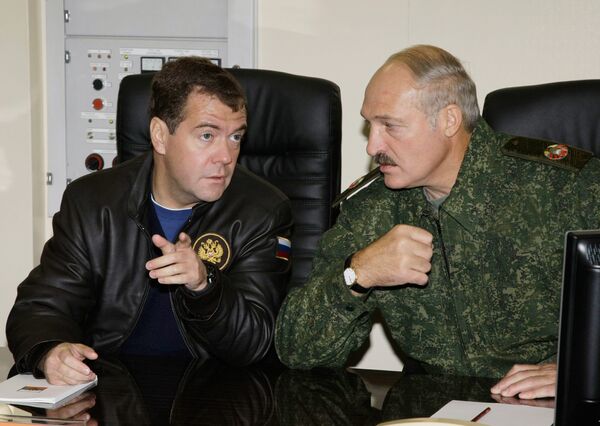 Dmitry Medvedev and his Belarusian counterpart, Alexander Lukashenko, attended the final phase of the massive military exercises, involving 12,500 personnel, aircraft and heavy weaponry from both sides, in western Belarus earlier on Tuesday.

Russia and Belarus conduct joint exercises regularly, but this is the first time such large-scale war games have taken place, prompting Western media to call the exercises anti-NATO. Russia has been concerned about the military bloc's eastward expansion.

Speaking at a parade that rounded off the drills, Medvedev said the exercises "show that our relations as allies have grown stronger ... we have been trying to create a solid basis to protect our national interests."

But Medvedev reiterated that the exercises were purely defensive.

The president attended a previous phase of the Zapad (West) 2009 exercise in Russia's westernmost exclave of Kaliningrad, in the Baltics, on Monday. The region borders Russia's former Soviet allies and now NATO members Lithuania and Poland.

Lukashenko, who has recently made steps to improve ties with the West against the backdrop of tensions with Russia, moved to indicate that Belarus was still a loyal Russian ally.

He said the unprecedented exercises were only possible thanks to the Russian leader, and "this is the first time we have achieved such a high level of exercises."

The two ex-Soviet states have been trying to establish a union state, but the efforts have stalled over a series of energy and other trade disputes.

Medvedev and Lukashenko agreed to hold similar exercises once every two years in Belarus and Russia.