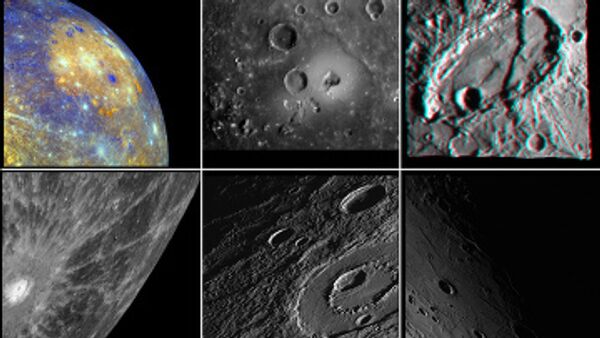 MOSCOW, September 29 (RIA Novosti) - NASA's Messenger probe makes its third and final flyby of Mercury on Tuesday, gathering data on the planet's surface, magnetic field and atmosphere before returning to enter orbit in 2011.

The U.S. space agency said the spacecraft will approach to 228 kilometers above the surface at 21:54 GMT (12:54 a.m.Wednesday Moscow time) for its closest look yet at the planet in an essential maneuver that uses Mercury's gravity to slow the probe down.

Messenger was launched in August 2004 and has completed almost three-quarters of its 7.9 billion km (4.9 billion miles) voyage to enter orbit around the closest planet to the sun in mid-March 2011.

"This flyby will be our last close look at the equatorial regions of Mercury, and it is our final planetary gravity assist, so it is important for the entire encounter to be executed as planned," said Sean Solomon, principal investigator at the Carnegie Institution in Washington.

"As enticing as these flybys have been for discovering some of Mercury's secrets, they are the hors d'oeuvres to the mission's main course - observing Mercury from orbit for an entire year," he added in a NASA press release.

A spectrometer will measure the extremely rarefied atmosphere of Mercury, in particular looking at the levels of sodium and calcium and the behavior of the atmosphere in circumpolar regions, while cameras are already taking high-resolution images of the planet, which will allow the detection of moons as small as 100 meters in diameter.

Scientists expect the spacecraft's imaging system to take more than 1,500 pictures, and spectrometers and a laser altimeter will also study the surface of the planet.

"We are going to collect high resolution, color images of scientifically interesting targets that we identified from the second flyby," said Ralph McNutt, a project scientist at the Johns Hopkins University Applied Physics Laboratory, which is leading the mission. "The spectrometer also will make measurements of those targets at the same time."

The spacecraft is part of NASA's Discovery Program of low-cost, scientifically focused space missions, which have explored a variety of Solar System objects since the Near Earth Asteroid Rendezvous (NEAR) in 1996. Each mission is required to cost less than $425 million - less than a single space shuttle flight to the International Space Station.