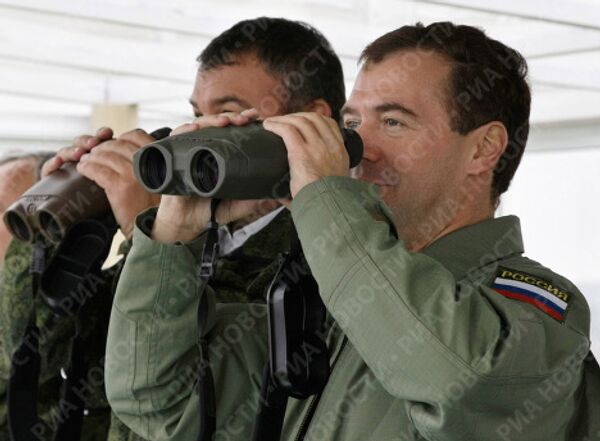 Russia will recreate a powerful Navy in the next ten years, President Dmitry Medvedev said on Monday at a meeting with military personnel who took part in the Zapad 2009 drills.

KALININGRAD REGION, September 28 (RIA Novosti) - Russia will recreate a powerful Navy in the next ten years, President Dmitry Medvedev said on Monday at a meeting with military personnel who took part in the Zapad 2009 drills.

The Zapad (West) 2009 large-scale joint military exercises being held by Russia and Belarus started on September 18 and will end on Tuesday, with about 12,500 service personnel and up to 200 items of military equipment and hardware having taken part.

Asked whether any of Russia's naval fleets are to be replaced now that many vessels have been in service for 20-25 years, Medvedev said: "We are facing the most large-scale task - to reestablish the Navy, as a significant number of our ships - both surface and submarine - are serving their last years now."

"This does not mean they can't operate, but nevertheless new ships should be put into operation. And we have a stock of submarines and ships," he said. "I am convinced we will be able to reestablish our Navy in the next decade at levels that our state will require. And we need a strong navy," the president said.

The service personnel, numbering over 20, presented Medvedev, who is Supreme Commander-in-Chief, with a striped sailor vest, a marine beret and a mockup of a battleship that took part in the maneuvers, while the president presented them with watches.

The ex-Soviet neighbors Russia and Belarus announced plans in the late 1990s to form a union state in a bid to achieve greater political, economic and military integration, but the project has largely existed on paper.

The exercise among other things rehearses interoperability within the framework of the Belarusian-Russian integrated air defense system, which the two countries agreed to establish recently.