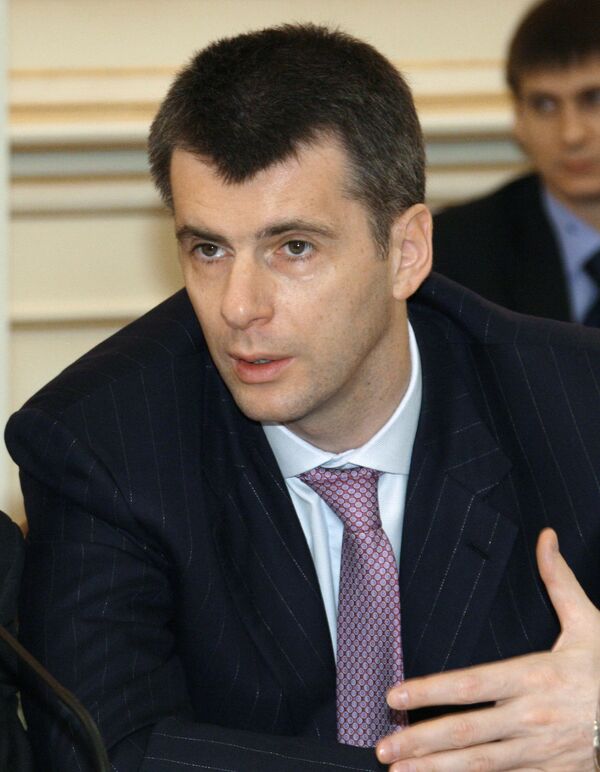 © Сергей Субботин
/
Go to the photo bank
Subscribe
A scandal involving metals magnate Mikhail Prokhorov, Russia's richest man, and alleged prostitutes has been dropped for a lack of evidence, the oligarch's lawyer said on Monday.

Prokhorov stepped down as head of the world's largest nickel producer Norilsk Nickel, two years ago after the scandal in France's elite Courchevel ski resort erupted. However, he was never charged over the incident.

"The case has been completely closed. The ruling was made by a magistrate on August 7, 2009. It concerns everyone involved in it," Alexander Genko said.

Prokhorov and his entourage were arrested in the posh ski resort in January 2007. All of them were later transferred to Lyon, where they were held in custody as part of investigation into an international prostitution ring.

In May 2007, three young women appealed to the Chembery court claiming "illegal arrest," and later, in April 2009 they demanded that criminal proceedings be launched against three police officers.

"The origin of the case is still covered in fog. We know that French police obtained huge sums incomparable to the scale of the case. It is quite obvious that they had been misinformed," Genko said.

Prokhorov himself described the closure of the case as "logical."

"I said initially that the case is a void. Its closure is logical. I am satisfied," the billionaire said in his blog.

The tycoon signed on Wednesday a letter of intent with New Jersey Nets owner Bruce Ratner to acquire a majority stake in the club and to take part in Ratner's Atlantic Yards mega-development project to construct a sports, residential and business complex in Brooklyn.