Cold war is dead, but there is life after death 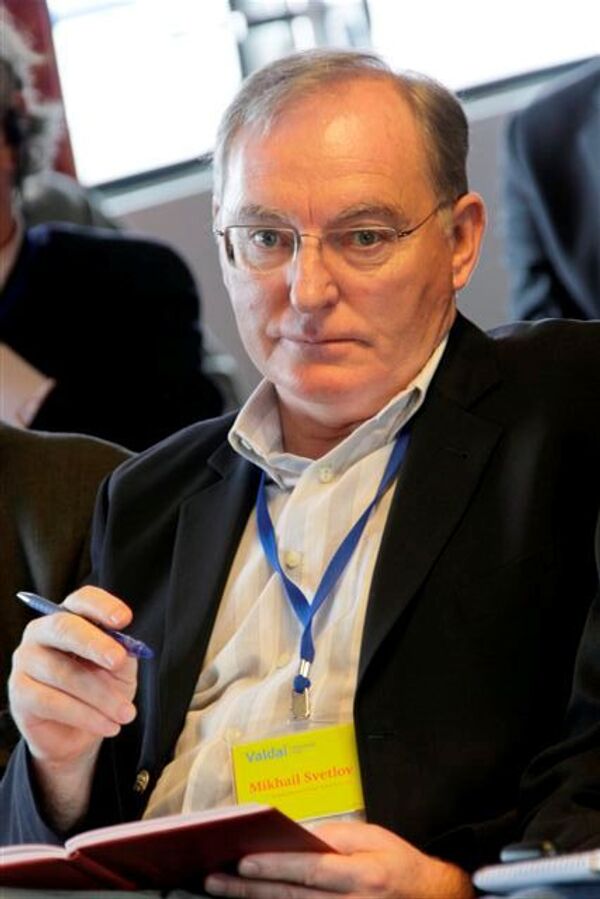 © RIA Novosti
Subscribe
The current financial crisis is an indicator for the Russian leadership that a global tectonic shift is in on its way. (By Piotr Dutkiewicz, Professor and Director, Carleton University, Ottawa, Canada)

The Cold war is dead. There is no systemic rivalry any longer as we all are firmly embraced by- one or another form- of capitalist/market relations. But there is life after death. We still live with the institutional and mental framework formed by the Cold War. All meaningful international institutions (such as UN, NATO, IMF, WB) were created under its shadows and (still too many) policy makers and their advisors are mentally following its logic of distrust and confrontation both in the ‘West’ and in Russia. The main reason for that is that the confrontation with Russia or the West has paid so far enormous political dividends among socially significant groups such as army, security apparatus, even bureaucrats.   Many will not be interested to drop it (both in the “west” and Russia) because it will deprive them of some significant economic and political privileges.

I have never seen Russia further apart from the West in the last twenty years. It seems that there are two structural reasons contributing to that state of relations:

1.    Western policy makers  are not yet ready to positively address the necessity for  a major institutional/legal restructuring; they are not ready to start talking “systemically” and

2.     Russians are taking a new perspective that makes such future talks much more complex. The current financial crisis is an indicator for the Russian leadership that a global tectonic shift is in on its way, the move that will re-configure the structure of power and wealth on the global scale. This process of global perestroika will not be very pleasant or friendly.  It will take time, but Russia would like to be on the surface of that tsunami and take a ride with it.  In that sense what Russia wants is no longer to address the West – it wants to address the world.  The game is no longer about Russia-West relations – it is about the whole package – this is about the place of Russia in the post-crisis world system.

Even if we have quite narrow room for maneuver in Russia- West relations, let’s try list areas where such conversation is not only possible but desirable; areas where the  there are genuinely common interests at stake such as – on   WMD non-proliferation, strategic arms control, counter-terrorism, anti-narcotics, , trade and energy.

Seems that in order to finally end the Cold War we (in the “west”) shall:

1.    First,   break the vicious circle of relations with Russia that looks more or less as though: we are enouncing a big initiative (such as for instance a NATO Strategic Partnership) – we do not trust Russians and we are working half-heartedly and are using half-measures – to this then Russians respond with the same, a mixture of substitutes and half-gestures – we are evaluating that as proof that Russia has either nothing to offer or that Russia is far away from our way of doing business – this convinces Russians that we are again playing a game with them with the final goal to fool them as usual. That is why “strategic partnership” with Russia has failed as many other initiatives in which both sides invested huge resources and expectations. We shall  take  more  constructive approach to Russia with carefully  caliber  selective cooperation; I would say – as domestic politics play a big role there – obvious area are those which bothers Russia most (for instance the growth of cocaine smuggling from Afghanistan makes Russia ready to closely cooperate on smuggling and the Afghan terror file etc.).

2.    Second, we should listen more carefully to what Russians are telling us;   don’t grandstand – less talk and recrimination, more action. Don’t always impute ulterior motives (e.g., so-called ‘energy blackmail’) or threaten unsustainable or useless punitive actions (G-8 expulsion; suspension of EU-Russia partnership agreement; denial of WTO accession for political reasons. Edit out the rhetoric (that is plenty) and think what the next few moves will be (i.e. after Kosovo it was pretty obvious that the case was being made for Abkhazia and Georgia).

3.    Third, engage Russia in what they propose i.e. a European security system; not to accept what Russia will propose but start discussion in persuading each other that a new security system would be far better than the one there exists today. Isolation and containment are a tempting solution, an easy one but wrong.

4.    Fourth, let’s try to persuade Russia that we are in the same boat – as one of the most talented Russian analysts Fedor Lukianov put it recently: “The effect of the crisis may be considered positive. Along with the world financial bubble, the bubble of overstated ambitions and expectations will also be blown away. The reality of the decline will force us to clearly define our priorities, to rank our intentions, and to reject the secondary in favor of what is most important. This concerns everyone.”

On the Russian side there is also plenty of space for change:

1.    Russia badly needs to do a much better job in explaining what she wants from the west;   Roderick Lane quoted recently Russia pundit: “we are strong again – but we don’t know what it’s for.”

2.    It is time that Russia proves its own positive utility in international relations; for many in the West that is no longer clear whether Moscow   has any significant influence over many international processes (for instance Iran).  It is time to show their cards otherwise, why should the West engage Russia as they can do the job without her?  If Russia would like to be treated as equal    , the question of Russian utility for stability and prosperity is an important one to answer.

3.    Avoid separating the West into ‘good’ and ‘bad’; attempting to accentuate divisions between Europe and America and within Europe – is not only counter-productive, but unnecessary (the West is already badly divided).

4.    Stop to be  - sometimes – arrogant/provocative and tame the desire to “show the west that we can”  (why for instance name the most recent military exercise with Belarus “ WEST” exactly at the same time when Obama is abandoning the missile shield project in Poland and Czech  republic as Russia requested).
If we will start to take some of those steps on either side, maybe we will finally close the Cold war chapter of our common history.