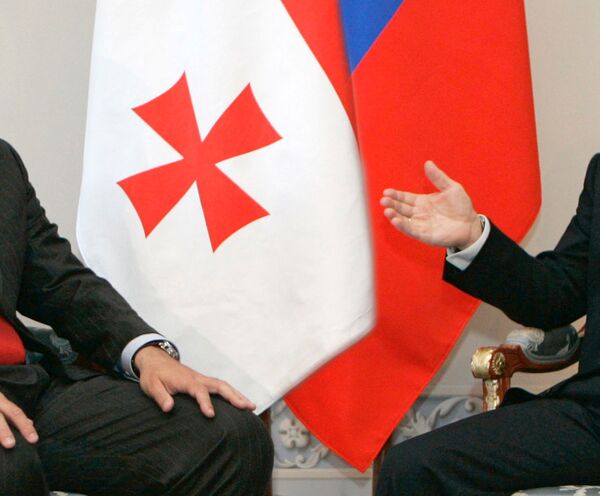 Subscribe
Georgia on Tuesday accused Russia of ignoring international law over Russia's deployment of a coast guard ship in Abkhazian waters and its intention to station border guard vessels there.

TBILISI/MOSCOW, September 22 (RIA Novosti) - Georgia on Tuesday accused Russia of ignoring international law over Russia's deployment of a coast guard ship in Abkhazian waters and its intention to station border guard vessels there.

"With its aggressive actions, Russia continues to pursue an annexationist policy regarding Georgia, this time by occupying the Abkhaz section of the internationally recognized Georgian offshore zone," the Georgian Foreign Ministry said.

The Novorossiisk arrived in Abkhazia on Sunday to protect the maritime borders of the former Georgian republic, which has been recognized by Russia as an independent state. It is part of a Russian coastguard contingent that will be based at the Abkhazian port of Ochamchira. The division is expected to have up to 10 Sobol class and Mangust class patrol boats.

Tbilisi considers Abkhazia and its waters part of Georgian territory, and has declared any unauthorized maritime shipments of goods to be illegal, but Abkhazia vowed in early September to use force to prevent Georgian "acts of piracy."

A senior Russian coast guard official said on September 15 that Russia would detain any vessel that violated Abkhazia's maritime border. Georgia responded by saying it would resist any such attempts by Russian ships.

Georgia seized the Panama-flagged Buket tanker and its cargo of gasoline and diesel fuel for Abkhazia last month as it sailed from Turkey to the tiny republic on the Black Sea.

Russia recognized Abkhazia and another former Georgian republic of South Ossetia last August after a five-day war with Georgia over the latter, which was attacked by Tbilisi in an attempt to bring it back under central control.

Under mutual assistance treaties signed last November, Russia pledged to help Abkhazia and South Ossetia protect their borders, and the signatories granted each other the right to set up military bases in their respective territories.

Russia's Defense Ministry has said it plans to open a base in Gudauta, in the west of Abkhazia, and staff it with at least 1,500 personnel by the end of this year.