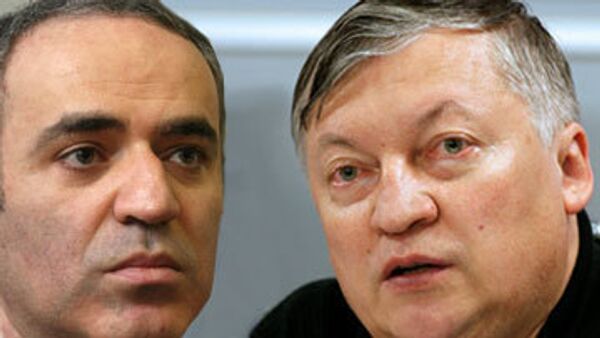 Subscribe
Russian chess legends Anatoly Karpov and Garry Kasparov have each played 20 simultaneous chess matches in Spain, including with an Arab billionaire who said his childhood dream had come true.

VALENCIA, September 22 (RIA Novosti) - Russian chess legends Anatoly Karpov and Garry Kasparov have each played 20 simultaneous chess matches in Spain, including with an Arab billionaire who said his childhood dream had come true.

The exhibition matches in the western Spanish city of Valencia ran ahead of the 12-game encounter between the two former world chess champions, scheduled to start at 9 p.m. Moscow time (17:00 GMT) on Tuesday.

The match marks the 25th anniversary of the first encounter between Karpov and Kasparov, the epic five-month struggle for the chess world championship in 1984.

Sulaiman Al-Fahim, who at the age of five was ranked the world's fifth best player in his age category, exchanged symbolic moves with Garry Kasparov, starting Monday's simultaneous chess match.

The Arab billionaire, who recently bought Portsmouth Football Club and is the head of the UAE chess federation, admitted Karpov and Kasparov have been his idols since he was a child, and said he could not miss the chance to attend the historic match between the "two Ks."

Besides Al-Fahim, some 400 chess lovers applied to take part in the match in Valencia, in which the pair won 39 of the 40 games. Kasparov easily won all 20 games, but Karpov drew with well-known Valencia chess player Irene Arques.

"First, Kaprov was overcoming me, but I managed to resist, and he offered a draw," Arques told journalists after the match.

The Spain event could be the last encounter between the former champions. Karpov has all but retired from tournaments, and Kasparov has officially quit chess to focus on politics.