Proton launch delayed due to problem with Glonass satellite 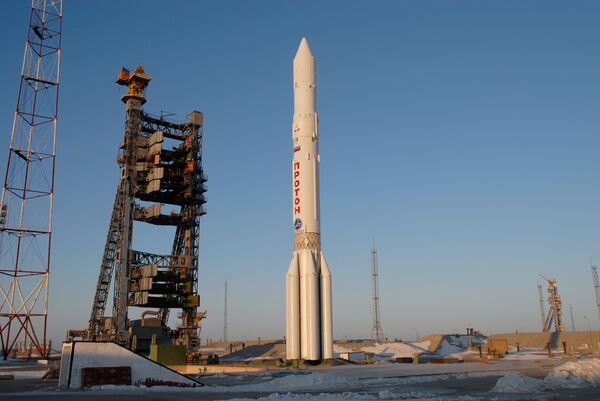 © Sergei Kazak
/
Go to the photo bank
Subscribe
Russia's launch of a Proton-M carrier rocket from the Baikonur space center has been delayed due to a problem with one of Glonass-M satellites, a source at the launch facility in Kazakhstan said Tuesday.

MOSCOW, September 22 (RIA Novosti) - Russia's launch of a Proton-M carrier rocket from the Baikonur space center has been delayed due to a problem with one of Glonass-M satellites, a source at the launch facility in Kazakhstan said Tuesday.

The source said that the decision to delay the launch from Friday until a later date was "made not at the space center but in Moscow, at [Russian Space Agency] Roscosmos."

"Everything is in order with the Proton. According to my data, there are a number of questions regarding the equipment of one of three new Glonass-M satellites installed onto the carrier rocket, so they decided to protect themselves by delaying the start until next month," the source said.

Roscosmos spokesman Alexander Vorobyov on Monday denied reports in a number of media that the launch of a number of Glonass satellites had been delayed. Russia planned two launches of a total of six satellites this year.

Last week the launch of a Soyuz 2.1b rocket with a Russian weather satellite on board was delayed twice due to poor weather and technical problems. The satellite was successfully put into orbit on Thursday.

The system reportedly has the 18 satellites needed for continuous navigation services covering the entire territory of the Russian Federation, with 24 satellites required to provide services worldwide.