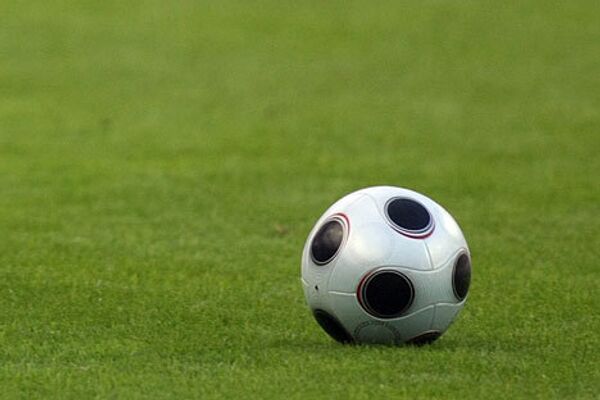 Subscribe
After a bright start and a stunning free kick gave Rubin a 1-0 lead that they clung for most of the game, Dynamo Kiev ruined the Russian champions' European debut with three goals in the last 20 minutes on Wednesday night.

MOSCOW, September 17 (RIA Novosti) - After a bright start and a stunning free kick gave Rubin a 1-0 lead that they clung for most of the game, Dynamo Kiev ruined the Russian champions' European debut with three goals in the last 20 minutes on Wednesday night.

A frantic first half out of keeping with many Champions League ties was illuminated in the 25th minute by Rubin's Argentinean star Alejandro Dominguez, who curled his free kick over the wall and into the top left-hand corner of Alexander Shovkovsky's goal.

At that point the Kazan side were worth their lead, but the home team turned up the pressure after going behind. Although Rubin were seemingly content to play their usual game, soaking up pressure with their well-drilled defense and looking to strike on the break, the visitors were forced onto the back foot and after half time it soon looked like a goal had to come.

And sure enough it did, with Yussuf Aliya's header from a corner going in off the post in the 71st minute.

Rubin's players began to look weary, and Dominguez made way for the more defensive Rafal Murawski with less than a quarter of an hour to play.

Within a couple of minutes, though, the Russians were behind, Gerson Magrao blasting an unstoppable left-footed shot into the top corner after Rubin failed to close play down on their right flank and then allowed the cross from deep to bounce through to the Brazilian at the far post.

The Kazan team tried to take the initiative back but with five minutes on the clock their fate was sealed as Vitaly Kaleshin's last-ditch challenge on Artyom Milevsky only rolled the ball into the path of Ukrainian substitute Oleh Husyev, who coolly fired past Sergei Ryzhikov to complete Rubin's misery.

Now the Russian Premier League leaders have two weeks to pick themselves up before European football makes its first appearance in Tatarstan with the visit of Italian champions Inter Milan on September 29. Dynamo, meanwhile, must steel themselves for a trip to Spanish and European champions Barcelona, who drew 0-0 in Milan on Wednesday night.