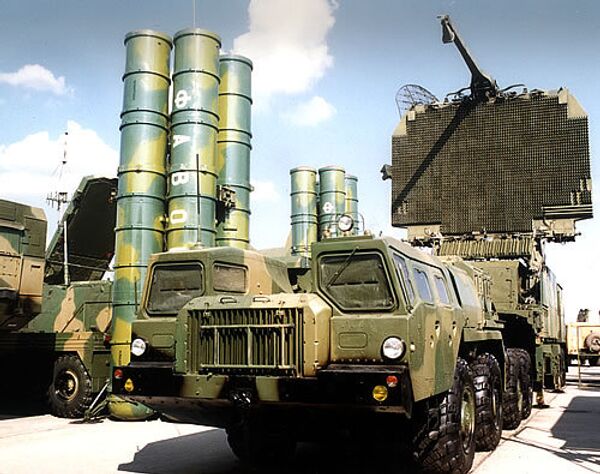 © www.raspletin.ru
Subscribe
Russia's advanced S-500 air defense system could be developed in the next few years, the Air Force commander said on Wednesday.

The S-500 is currently at the blueprint stage at the Almaz-Antei company and is expected to be rolled out by 2012.

"This work is in progress...I think this system will appear in the near future," Col. Gen. Alexander Zelin said.

The new system is expected to outperform Russia's most advanced S-400 as well as the U.S. Patriot Advanced Capability-3 system.

The S-400 Triumf (SA-21 Growler) is capable of intercepting and destroying airborne targets at a distance of up to 400 kilometers (250 miles), and can simultaneously engage up to six targets.

The S-500 is expected to have an extended range of up to 600 km (over 370 miles) and simultaneously engage up to 10 targets. The system will be capable of destroying hypersonic and ballistic targets.

Zelin said Russia's Defense Ministry considers the delivery of S-400 air defense missile systems to the Russian Armed Forces a priority at present, although exports of these systems to other countries of the Commonwealth of the Independent States (CIS) could be considered.

The general earlier said in line with a new defense model air-space defense brigades within Russia's Air Force will be established and equipped with advanced S-400 and S-500 air defense systems.

Russia has already deployed two S-400 regiments to protect the airspace around Moscow and industrial regions in the central part of the country, and an S-400 battalion in Russia's Far East.