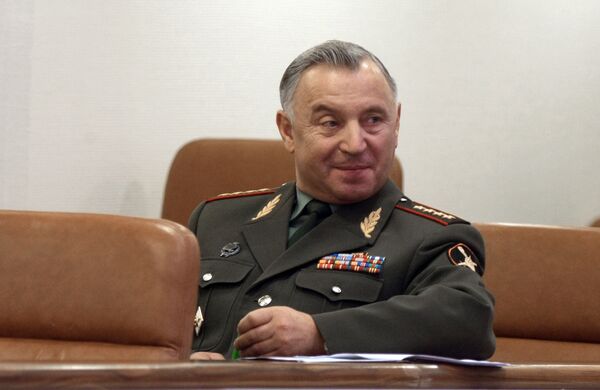 © RIA Novosti . Iliya Pitalev
/
Go to the photo bank
Subscribe
The chief of the Russian General Staff has arrived in Cuba for a working visit at the invitation of the Cuban military leadership.

HAVANA, September 15 (RIA Novosti) - The chief of the Russian General Staff has arrived in Cuba for a working visit at the invitation of the Cuban military leadership.

Gen. Nikolai Makarov, who landed in Havana late on Monday, will meet with his Cuban counterpart Gen. Alvaro Lopez Miera and other top brass, and "visit a number of military installations," Russian Ambassador in Cuba Mikhail Kamynin said.

Although the Cuban leadership has repeatedly said it has no intention of resuming military cooperation with Russia after the surprise closure of the Russian electronic listening post in Lourdes in 2001, bilateral military ties seem to have been improving following the visit of Russian Security Council chief Nikolai Patrushev and Russian Deputy Prime Minister Igor Sechin to Cuba in July last year.

A group of Russian warships, led by the Admiral Chabanenko destroyer visited Cuba in December during a Caribbean tour.

Moscow had a military presence on Cuba for almost four decades after the Cuban crisis, maintaining an electronic listening post at Lourdes, about 20 kilometers (12 miles) from Havana, to monitor U.S. military activity and communications.

The Lourdes facility, the largest Russian SIGINT site abroad, was shut down in October 2001.

The facility covered a 28 square-mile area, with 1,000-1,500 Russian engineers, technicians, and military personnel reportedly working at the base, which was believed to cost Russia $200 million a year to run.

The complex was capable of monitoring a wide array of commercial and government communications throughout the southeastern United States, and between the United States and Europe.

Lourdes intercepted transmissions from microwave towers in the United States, communication satellite downlinks, and a wide range of shortwave and high-frequency radio transmissions.

Some Russian military sources have recently indicated that if a political decision is made Moscow could resume operations at the Lourdes facility and also use airbases in Cuba for refueling of strategic aircraft.