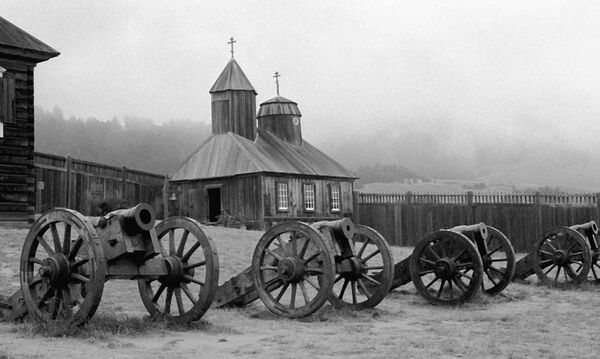 © RIA Novosti . Shlay
/
Go to the photo bank
Subscribe
A coastal fort established by Russian colonists in California almost 200 years ago is threatened by cuts to the state's parks budget, but Russian diplomats are working to keep the historic site open.

WASHINGTON, September 15 (RIA Novosti) - A coastal fort established by Russian colonists in California almost 200 years ago is threatened by cuts to the state's parks budget, but Russian diplomats are working to keep the historic site open.

Fort Ross, around 120 kilometers (80 miles) north of San Francisco, was founded in 1812 under a tsarist charter by the Russian-American Company and was used for three decades.

The Fort Ross Historic State Park was established in 1906 and includes the restored Rotchev House, built around 1836 for the administrator of the outpost and a reconstruction of the first Russian Orthodox church in the Americas south of Alaska.

But the symbol of U.S.-Russian ties is now under threat as California tries to close a $24 billion hole in its budget, including by cutting more than $50 million over two years from its funding for state parks. Around 100 of California's 279 state parks could face closure.

Russia's ambassador to the United States visited the park at the end of August after the possibility of its closure became known, and sent a personal letter to Governor Arnold Schwarzenegger.

"I would like to hope that, even at this difficult time, the significance of Fort Ross as a symbol of the rich history of California and the United States as well as a memorable landmark in Russia-U.S. relations will be taken into consideration when your office makes a final decision," Sergei Kislyak wrote.

The California governor replied that he recognized the significance of the park, and would try to keep as many parks open as possible, but he did not make any commitments.

The Russian consulate in San Francisco has also been involved and the embassy press secretary in Washington said the diplomatic efforts would continue.

"The Russian Embassy in the United States, the consulate-general in San Francisco and Ambassador Sergei Kislyak personally will have further contact with both official and unofficial people who can have an effect on finding a solution to this problem," Yevgeny Khorishko said.

The San Francisco Chronicle said the park was the 77th most-popular in the state, with 200,000 visitors each year. They include many Russians and Americans of Russian descent, who even use the church on special occasions.

Although state park officials stress that no decisions have been made on which sites will go, some parks in California are self-financing through visitor fees and Fort Ross falls well short of the nearly $1 million required each year, losing a reported $800,000 annually.

There are discussions on public-private partnerships to help finance the running of the park, and even suggestions that the Russian government could have a role.

The ambassador would not be drawn on that during his visit, but a spokesperson for the governor welcomed Russia's involvement in the search for a solution.