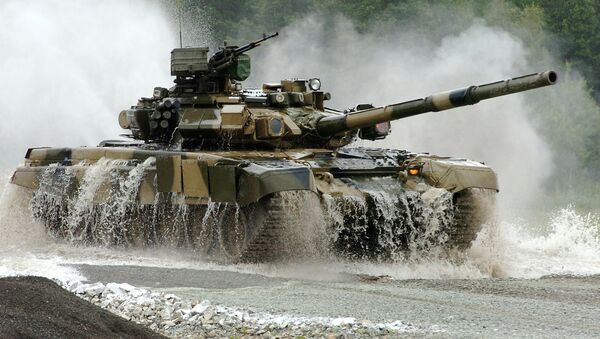 © Aleksey Vladykin
/
Go to the photo bank
Subscribe
The Russian military has denied the existence of a new-generation main battle tank (MBT) based on T-80 design and featuring explosive reactive armor and a box-shaped turret.

MOSCOW, September 13 (RIA Novosti) - The Russian military has denied the existence of a new-generation main battle tank (MBT) based on T-80 design and featuring explosive reactive armor and a box-shaped turret.

The Russian media has recently resumed discussion of the secret tank, dubbed Black Eagle, which was developed by the Omsk Transmash design bureau and whose pictures were shown in several publications and on the Internet.

"There was no such project...and those 20-year-old pictures show a mock-up of a futuristic tank which remained just a product of someone's imagination," Col. Vladimir Voitov, head of research at the Main Directorate of the Armored Troops, said in an interview with the Echo Moskvy radio on Saturday.

He added that he was aware of a prototype of an experimental tank, but insisted that 'the turret of the vehicle did not have anything inside."

According to the Russian media, an early prototype of the Black Eagle was shown at an arms exposition in Siberia, in June 1999. It appeared to be based on a lengthened T-80U hull, and to have very thick front armor and new-generation Kaktus explosive reactive armor.

However, recent reports in open sources suggest that the Black Eagle program has been halted due to the acceptance of the T-90, built by the Uralvagonzavod plant, into the Russian military in the mid-1990s.

In addition, Russia has reportedly opted for Uralvagonzavod as the developer and manufacturer of a new-generation MBT, which will most likely have a designation as T-95.

Sergei Mayev, head of the Federal Service for Defense Contracts (Rosoboronzakaz) told a news conference in July 2008 that the Russian Armed Forces would start receiving new-generation tanks superior to the T-90 main battle tank after 2010.

The new tank will feature better firepower, maneuverability, electronics and armor protection than the T-90 MBT.

According to some sources, the new tank may be equipped with a 152-mm smoothbore gun capable of firing guided missiles with a range of 6,000-7,000 meters.