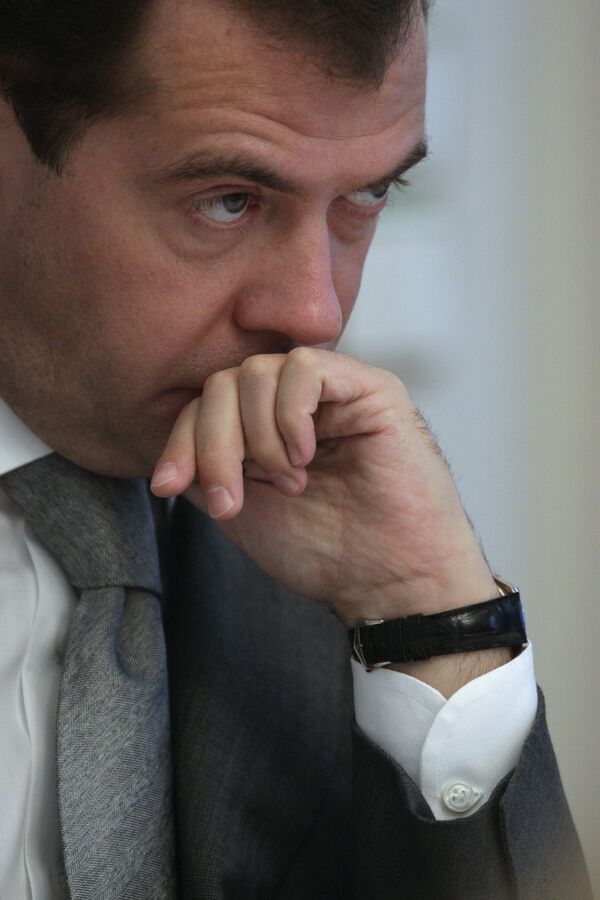 Russian President Dmitry Medvedev ordered the government on Friday to prepare draft laws on his package of measures to counter alcohol abuse.

On August 12 the president said that measures taken so far to curb alcohol abuse and other addictions in the country had been insufficient, and ordered the government to develop new rules for the sale of alcohol.

The proposals include tougher sanctions against retailers who break alcohol sale laws, which may lead to criminal proceedings against repeat violators.

The law will also enable regional authorities to introduce restrictions on the times, conditions and locations of alcohol sales.

The measures also include a ban on selling low-alcoholic drinks in containers of more than 330 ml.

Beer and other low alcoholic drinks are currently sold in Russia in cans and bottles with volume ranging from 100 ml to five liters and more.

The Russian Public Chamber said in a report in June that around 500,000 Russians die from alcohol-related deaths annually.

The average Russian drinks 17 liters of spirits a year, with some 2 billion liters of alcohol being consumed in Russia annually. Alcohol is also involved in some 80% of murders and 40% of suicides in Russia, the report said.

The pollster VTsIOM has said that 65% of Russians would support an anti-alcohol program, with 34% totally in favor of a campaign and 31% "likely to support it." Only 8% of respondents were against the initiative and 17% preferred to say no to any campaign with 10% unable to answer. The pollster said more women were in favor of anti-alcohol measures.

The most popular measure among respondents (63%) was a ban on selling alcohol to under-21s. A ban on alcohol advertising was also popular at 57%, with 47% voting for a campaign promoting healthy lifestyles. Some 34% of respondents said drinking alcohol and being drunk in public places should also be made a criminal offense.

Former Soviet leader Mikhail Gorbachev, the architect of sweeping reforms in the late 1980s, also raised concern in June: "We are destroying ourselves, and then we will look for those who destroyed our country, for those who made us drink. The situation is such that we must take control."

Gorbachev briefly introduced prohibition in the Soviet Union in 1985 in an attempt to put a halt to the rampant alcoholism that was already taking its toll on the nation's economy and health system, which resulted in an increase in people drinking home-made alcohol and cleaning fluids.