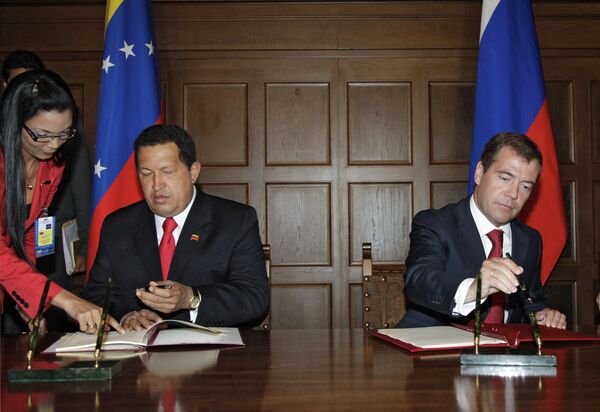 © POOL
/
Go to the mediabank
Subscribe
International
India
Africa
Russia and Venezuela signed on Thursday a package of deals, including one to develop the Latin American country's Orinoco oil belt, with estimated reserves of 235 billion barrels of heavy oil.

MOSCOW, September 10 (RIA Novosti) - Russia and Venezuela signed on Thursday a package of deals, including one to develop the Latin American country's Orinoco oil belt, with estimated reserves of 235 billion barrels of heavy oil.

Venezuela's PdVSA state oil firm and a consortium of major Russian producers signed a memorandum of understanding on cooperation in Orinoco, and a separate memo on establishing a joint venture to develop the Junin-6 field.

Venezuelan President Hugo Chavez said the joint venture would have a daily output of 400,000 barrels of oil. In addition, a new oil refinery will be built in Venezuela.

The Venezuelan leader said the agreement was central to Russian-Venezuelan relations.

PdVSA also signed agreements with Russia's pipeline monopoly Transneft to build infrastructure in the Orinoco belt and another deal with oil giant Rosneft.

Among other documents, signed during Chavez's two-day visit to Russia are an interstate cooperation agreement on joint strategic projects and a bilateral agreement on intellectual property protection in terms of military cooperation.

Russian President Dmitry Medvedev said bilateral relations between the two states have moved to a new level with the agreements.

"We were close partners before, but the documents signed today make our relations sustainable and predictable for decades to come," he said, adding that more agreements were likely to follow.

Chavez, in his turn, thanked the Russian side for a fruitful visit.