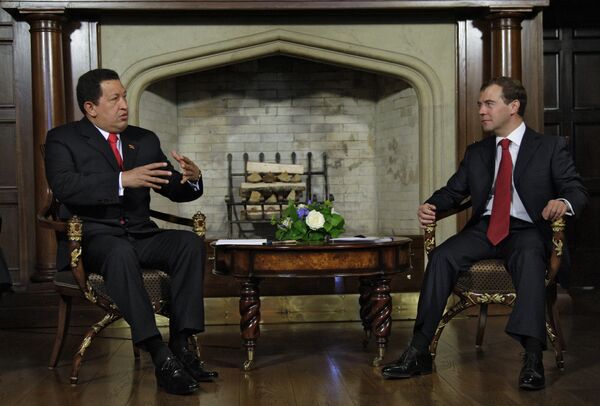 During talks with President Dmitry Medvedev in the Kremlin, Chavez said: "I want to take the opportunity to announce that Venezuela is joining those recognizing the independence of South Ossetia and Abkhazia."

Moscow recognized the two pro-Russian regions after a brief war last August to repel Georgia's attack on South Ossetia. The move, seen partly as a response to the broad recognition of Kosovo's independence from Serbia, was condemned internationally.

Nicaragua was until recently the only other country to have followed Russia's suit. Russian media reports have said that more Latin American nations could recognize the two republics, which have maintained de-facto independence since bloody post-Soviet conflicts with Georgia in the early 1990s.

Moscow's ex-Soviet allies, including Belarus, have so far refrained from recognizing Abkhazia and South Ossetia.

Ex-Soviet Georgia, backed by the United States and Europe, severed diplomatic ties with Russia last year over it's recognition of the republics.

Medvedev told Chavez: "We have been taking the fate of these states close to our hearts and I want to thank you for this decision."

The Venezuelan leader is in Russia on a two-day working visit, his seventh as president, which is part of his 11-day foreign tour.

The visit is dominated by energy and military deals. A senior Kremlin official said on Wednesday that Russia was considering granting Venezuela a loan to buy more Russian arms.

Chavez has recently announced plans to buy dozens of Russian tanks in response to U.S. preparations to deploy military bases in neighboring Colombia.

A senior academic at Russia’s Latin America Institute said the decision came as no surprise.

“This is an expected decision. Venezuelan lawmakers at recent parliamentary hearings on the issue backed the recognition of the two republics. And Chavez telephoned [Russian premier] Putin last year saying Venezuela supported Russia in its operation to enforce peace and condemned American ‘imperialistic’ moves in the region,” Emil Dabagyan said.

Senior Russian lawmakers welcomed the recognition by Venezuela, saying it was the beginning of a worldwide process.

"...A wave of recognition will slowly but surely sweep the whole political map of the world," Leonid Slutsky, deputy head of the State Duma international committee, said adding the decision was not "commercial."

Speaking about Russia's recognition of the two regions a year ago, Slutsky said Moscow had had no other option and thereby "guaranteed the nations the right to live."

Konstantin Zatulin, a senior member of the post-Soviet CIS committee, said "gradually South Ossetia and Abkhazia's sovereignty will be recognized by the countries that do not keep pace with Washington's foreign policies."

"We have always looked to Venezuela and some other Latin American countries with hope," Bagapsh said. "An Abkhazian delegation is now in Caracas after visiting Cuba and Nicaragua, where they received a warm welcome and support."