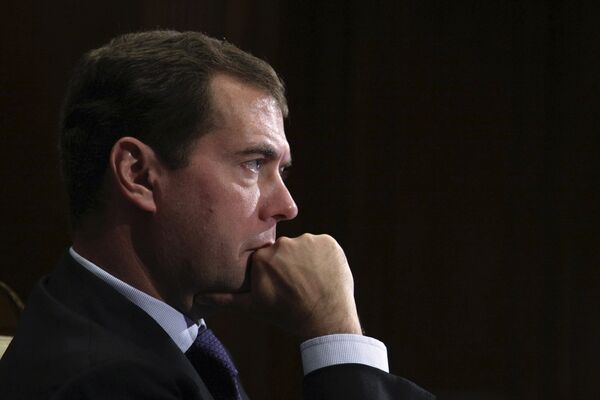 Russia's president highlighted economic backwardness and corruption as the key reasons for the country's problems, and urged the nation to unite in tackling them.

MOSCOW, September 10 (RIA Novosti) - Russia's president highlighted economic backwardness and corruption as the key reasons for the country's problems, and urged the nation to unite in tackling them, in an article published on Thursday.

In an article for the Gazeta daily, Dmitry Medvedev said: "The global economic crisis has revealed that everything is far from fine. Twenty years of drastic reforms have not made our country less dependent on commodity exports. Our current economy has preserved the Soviet economic system's worst flaw - a severe disregard for people's needs."

"These problems are too great even for a country like Russia," Medvedev said.

He acknowledged that the state's excessive control over the economy and other spheres of life has nurtured corruption, but also blamed business leaders seeking access to financial flows and ownership of property instead of encouraging a talented workforce and renovating enterprises.

Medvedev, 43, who became president last May after being handpicked by Vladimir Putin as his preferred successor, has made the fight against corruption a priority of his presidency. He raised the issue in a speech during the first anniversary of his inauguration.

A nationwide survey in spring said that over 50% of respondents believe that corruption is an unavoidable and permanent fact of life in Russia.

Medvedev, however, also blamed a lack of initiative and responsibility among ordinary Russians for persisting levels of corruption and low living standards.

He pledged changes, but not at the expense of millions of lives, as was the case in the reforms undertaken by Tsar Peter the Great and Bolsheviks.

Medvedev reaffirmed his focus on high technology development as a key to economic growth, democracy and freedom. "The 'smarter' our economy will be, the higher living standards our citizens will enjoy. This will make our political system and society in general more liberated, just and humane."

Speaking on the goals facing the country, he said Russia must be well armed to be able to counter threats to its own and allies' security. Medvedev said historically Russia had often protected smaller nations, which was also the case with breakaway South Ossetia, attacked by Georgia last August.

Russia repelled the offensive and later recognized the region as an independent state triggering international condemnation for violating Georgia's territorial integrity. The move was seen as Moscow's response to the recognition of Kosovo's independent from Serbia by the majority of world powers.

"I am inviting all those who share my convictions to cooperation, as well as those who do not, but want changes for the better," Medvedev said, adding that influential groups of corrupt officials and business leaders would try to block their efforts.

"They are happy where they are. They plan to squeeze more profit from what remains of Soviet-era industries until the end of their lives, and to sell out natural resources that belong to the nation. They do not make anything new, do not want development and are afraid of it. But the future does not lie with them. It is ours. There is an absolute majority of people like us. We will work patiently, consistently and pragmatically... We will overcome the crisis, backwardness and corruption, and establish a new Russia."

Medvedev also urged for contributions to the debate on the country's development to be sent to kremlin@gov.ru. He said they would also be taken into account while preparing his state-of-the nation address due to be delivered later in fall.