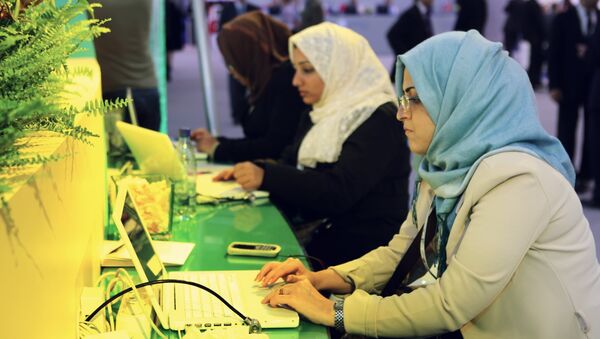 © RIA Novosti . Alexei Danichev
/
Go to the photo bank
Subscribe
A female journalist in Sudan was fined $200 on Monday for wearing pants in a restaurant, Arab media reported.

CAIRO, September 7 (RIA Novosti) - A female journalist in Sudan was fined $200 on Monday for wearing pants in a restaurant, Arab media reported.

The court in Khartoum ruled that Lubna Hussein had violated Sudan's indecency laws by wearing pants in public. She was detained by police on July 3, together with other 12 women,

all of whom had also been wearing pants.

Ten of the other women were fined and flogged in accordance with the country's strict Islamic laws after pleading guilty, but Hussein opted to go to a trial.

Local media reports suggested the Sudanese authorities had opted not to flog Hussein to avoid international criticism after the case attracted global attention.

"I am not going to pay the fine," she said after sentence was passed. "I would rather go to prison".

More than 100 women, all of them wearing pants, held a demonstration in support of Hussein during the trial. The women were attacked by a group of radical Muslims, but police soon broke up the disturbances. Some 40 women were arrested, with eyewitnesses saying a number of them were injured.

Hussein was working for the Sudanese Al-Sahafa newspaper and for the United Nations at the time of her arrest. As a UN worker, Hussein could have enjoyed immunity from prosecution, but opted to resign and stand trial.