Russia confirms talks on delivery of MiG-31 aircraft to Syria 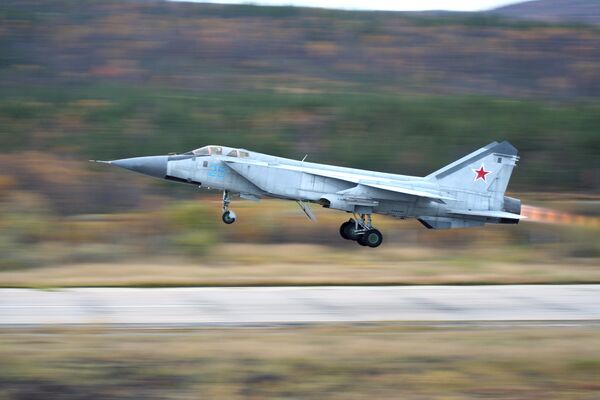 © RIA Novosti . Andrey Zinchuk
/
Go to the photo bank
Subscribe
Russia and Syria are in talks on the delivery of at least eight MiG-31 Foxhound interceptors under a contract signed two years ago, a Russian business daily said on Thursday, citing an industry official.

MOSCOW, September 3 (RIA Novosti) - Russia and Syria are in talks on the delivery of at least eight MiG-31 Foxhound interceptors under a contract signed two years ago, a Russian business daily said on Thursday, citing an industry official.

Kommersant said Russia has so far denied reaching a deal with Syria on MiG-31 sales, but Damascus insisted in May on the existence of a contract worth an estimated $400-500 million.

"A couple of years ago we signed two contracts [with Syria] - one on MiG-29M and another - on MiG-31. The first is being implemented, but the MiG-31 contract has never become effective... I hope that the contract will be implemented sooner or later," Alexei Fyodorov, the head of Russia's United Aircraft Corporation (UAC), told Kommersant.

According to Kommersant, Russia's Sokol aircraft manufacturing plant started preparatory work for assembly of MiG-31 from hulls (without engines and weapons) kept in storage since 1994, when the production of the interceptors was officially discontinued.

However, the actual assembly has never materialized, the paper said.

The MiG-31 Foxhound is a two-seat supersonic interceptor aircraft developed to replace the MiG-25 Foxbat. It is equipped with two D-30F6 turbofan two-shaft engines with a common afterburner and a variable supersonic nozzle, which allow the aircraft to fly at supersonic speeds of up to Mach 2.83.

According to various sources, about 500 MiG-31s have been produced since production began in 1978, approximately 370 of which remain in service with the Russian Air Force.

The sales of MiG-31 aircraft to Damascus may spark criticism in the West and Israel, which consider arming Syria a threat to regional security, the Kommersant said.