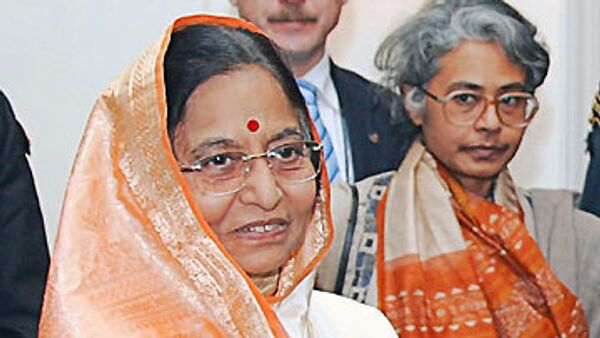 "The visit is expected to strengthen mutual trust and understanding, as well as confidence in Russia on a number of issues," she said.

On Wednesday evening the Russian and Indian presidents are scheduled to attend a performance of Indian dancers at the Bolshoi Theater, held as part of the Year of India in Russia.

On Thursday Patil will hold official meetings with Medvedev and Russian Prime Minister Vladimir Putin. She will also meet with speakers of the two chambers of the Russian parliament - Federation Council Speaker Sergei Mironov and State Duma Speaker Boris Gryzlov.

On Friday Pratil will head to Russia's second-largest city of St. Petersburg, where she will meet with presidential envoy to the Northwest Federal District, Ilya Klebanov and the city's deputy governor, Alexander Vakhmistrov.

India and Russia have enjoyed close bilateral ties, particularly in the areas of defense, nuclear energy and space industry. The two countries have completed the design of an unmanned lunar orbiter due to be sent to the Moon in 2011-2012.

Russia is due to build an additional four reactors for the Kudankulam nuclear power plant in India under a deal signed in 2008.

Last week the first batch of ten T-90 Bhishma battle tanks, assembled in India under Russian license, were handed over to the Indian Army.