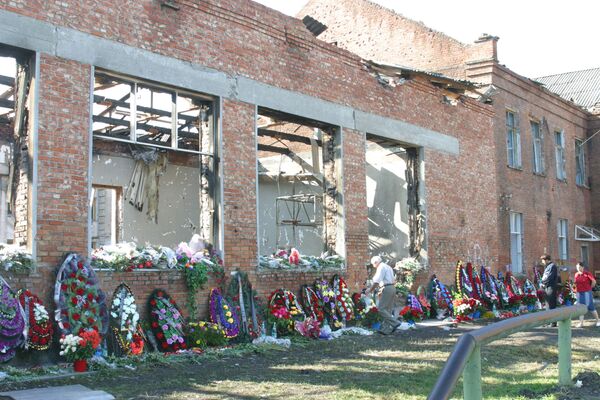 © Наталья Львова
/
Go to the photo bank
Subscribe
MOSCOW. (Maxim Krans, RIA Novosti political commentator) - On September 1, 2004, The North Caucasus town of Beslan became know to the world for a tragic reason. A terrorist group took hostage 1,128 people who gathered at a local school on that day; two days later, 319 hostages including 187 children were killed in the storming of the building. Hundreds of schoolchildren and their relatives were injured.

MOSCOW. (Maxim Krans, RIA Novosti political commentator) - On September 1, 2004, The North Caucasus town of Beslan became know to the world for a tragic reason. A terrorist group took hostage 1,128 people who gathered at a local school on that day; two days later, 319 hostages including 187 children were killed in the storming of the building. Hundreds of schoolchildren and their relatives were injured.

The predictable blamestorming resulted in an administrative change. The Kremlin began appointing regional governors, rather than electing as before, thus taking full responsibility for the distribution of forces in North Caucasus republics. Special services closed ranks, too: new anti-terrorist divisions began working more effectively; the masterminds of the Beslan attack were killed or sentenced to life in prison.

But can we announce a decisive victory over terrorism? The long list of terrorist attacks committed in the North Caucasus in the past few years suggests not. Some stabilization has been registered in Chechnya, and the counter-terrorist operation was lifted there in April. However, the number of terrorist attacks in the area has recently grown. Local terrorists have re-adopted the practice of using suicide bombers: on July 26, one of them tried to plant a bomb in a Grozny concert hall, but had to set it off during a personal security check, killing himself and several police officers.

Moreover, this increase in violence is spreading to other North Caucasus republics. In Ingushetia, 107 people were killed and nine kidnapped between January and mid-May. The most high-profile attack was against the republic's president, Yunus-Bek Yevkurov, who barely survived the attempt on his life. Several Ingush officials were killed this summer, including the construction minister, deputy chairman of the Supreme Court, and former deputy prime minister, Bashir Aushev. A police department was blown up in Nazran. The list is even longer, and more victims might follow.

In Dagestan, underground Islamic groups have started a massive hunt for officials and police and security officers. They get killed there almost every day. In June, a sniper shot a local interior department head. Apart from local officials, terrorists also target other undesirable activists. Natalya Estemirova, who worked for the Chechen branch of the Memorial Human Rights Center, was killed recently in a high-profile attack. She monitored the situation in various "hot spots" in the North Caucasus and reported her observations of growing violence to the international community.

Both federal and local authorities have been fighting separatism, religious extremism, and terrorism in the North Caucasus for one and half decades, but they aren't reaching the underlying reasons of these phenomena.

The reasons might seem obvious, especially the economic ones. The old federal targeted program for the development of southern Russia in 2002 through 2006 was not very effective, as admitted by Alexander Torshin, head of the parliamentary commission on Beslan.

The Southern Federal District is still far behind the other constituent entities of Russia in terms of social and economic indicators. For example, the unemployed account for 30% of residents in Makhachkala, the capital of Dagestan, and for up to 80% in the republic's mountainous areas. In Ingushetia, unemployment reaches 53%, in Kabardino-Balkaria 27%, Karachai-Circassia 20%, and Adygea 16%.

In Chechnya, only every third resident has a job, while it is obvious that unemployment creates a nourishing environment for terrorism.

President Dmitry Medvedev said at a Stavropol meeting on the situation in the region on August 19, "The main problem is, sadly, rooted in our country. You know exactly when conditions for the development of crime and religious extremism were established: following the disintegration of the state. The roots of the problem are in the makeup of our lives: in unemployment, poverty, in clans who don't give a damn about the people, but simply divide the cash flow arriving here among themselves, who fight for contracts and then with each other to settle scores, and in corruption which, indeed, has become very widespread within law enforcement agencies too."

Corrupt officials also contribute to local tensions. Valery Gizoyev, deputy head of the North Ossetian parliamentary committee for law, legality and local self-government, said, "All financial injections intended to boost the North Caucasus economy are ineffective because of corruption. Part of the money might even go to the militants."

According to analyst Svetlana Lipina, "The clan and corporate elite in power, ethnic-related in most cases, have monopolized the political and economic resources and established informal procedures for making political and administrative decisions. Can't this be the reason why all attempts to solve North Caucasus problems by economic measures have produced no real solution?"

There are several important lessons to be learnt from the Beslan tragedy. Terrorism should be fought valiantly and consistently. The old knot of problems in the Caucasus should be disentangled with care rather than simply cut; it needs to be undone patiently, consistently and cleverly.