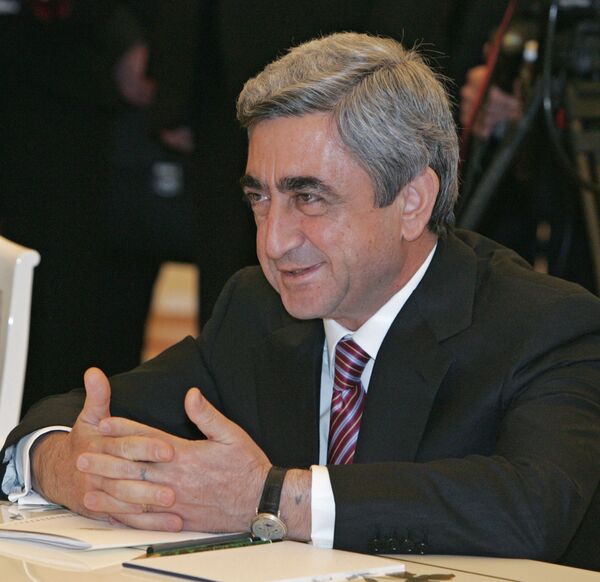 Turkey and Armenia reached agreement on Monday to start "internal political consultations" on re-establishing diplomatic relations and opening their borders. The negotiations were mediated by Switzerland.

"The signing of the protocols has brought Armenia closer to the possibility of settling bilateral ties with Turkey," Sargsyan said at the opening of an annual meeting of the country's diplomatic corps.

"We have made an attempt to settle relations with our neighbor in a decent way, as befits the civilized 21st century. I think the protocols do provide such a possibility," the Armenian president said.

Turkey and Armenia have for the past two years held talks behind closed doors mediated by Switzerland to normalize bilateral relations. The two countries agreed to a "roadmap" to normalize their relations under Swiss mediation this April.

Turkish President Abdullah Gul first visited Yerevan, the capital of Armenia, last September to watch a football match between the two countries in their qualifying group for the 2010 World Cup.

Sargsyan, who is expected to travel to Turkey on October 14 to attend the return match, previously said he would go if the border has reopened or Turkey has lifted its economic blockade of landlocked Armenia.

Turkish Foreign Minister Ahmet Davutoglu urged on Tuesday a settlement be found as soon as possible in the long-running conflict between Armenia and Azerbaijan over Nagorny Karabakh, a mountainous region in Azerbaijan with a largely Armenian population.