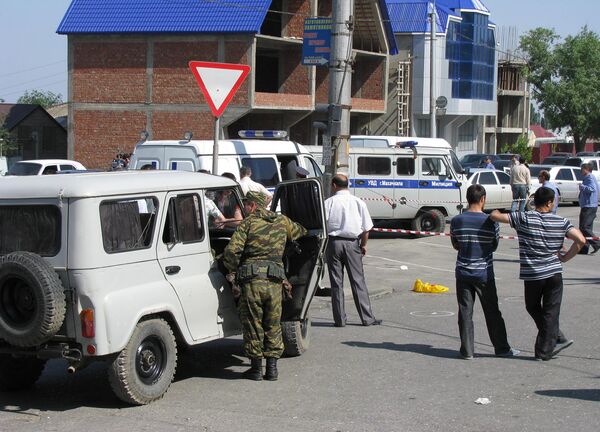 MAKHACHKALA, September 1 (RIA Novosti) - A second car bombing within a few hours in the volatile south Russian republic of Dagestan has killed at least one person and injured at least 14 others, local police said on Tuesday.

Earlier on Tuesday, four police officers and a civilian were injured in a car bomb blast on the outskirts of the regional capital, Makhachkala.

In the second attack, a suicide bomber blew up his car at a police post, killing a Dagestani customs officer who was passing by in his vehicle, a police spokesman told RIA Novosti.

"Another 14 people were injured. These include police officers, civilians, and doctors on duty at the police post," he said.

The spokesman said at least five of the wounded are in hospital in a serious condition, and the others were sent home after receiving first aid.

Commenting on the earlier bomb blast in Makhachkala, Dagestani Interior Minister Ali Magomedov said police had prevented a more severe attack, as the suspected suicide bomber had planned to set off the explosive device in a public place in the capital's center.

Russia's North Caucasus regions have seen a rise in violence in recent months. Attacks on police, officials and troops, and special operations against militants have been reported almost daily in Dagestan, Chechnya, and Ingushetia.

In June, Dagestan's interior minister was assassinated at a wedding reception.