Russia: building a nuclear deterrent for the sake of peace (60th anniversary of the first Soviet atomic test) 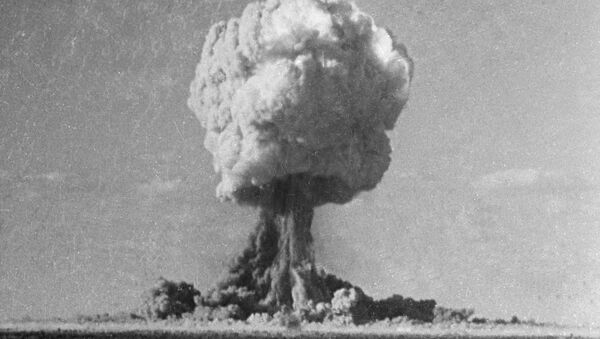 The results of the Manhattan Project revealed themselves in the desert and then over two Japanese cities in the summer of 1945. On the eve of the Cold War and America's post-Hiroshima intoxication, Moscow was faced with a challenge of bridging the nuclear gap in a short span of time. The relevant project did not receive a name but the end product was named RDS-1, which could be interpreted as the Russian acronym for "Russia does it itself" or "Stalin's jet engine."

A design bureau was set up at the Igor Kurchatov Laboratory in the Mordovian village of Sarov in April 1946 on the basis of artillery shell production. A reactor, a combine on the production of uranium-235, and a radiochemical plant were built near Chelyabinsk by 1948.

The rates were astonishing. Whole complexes were being built practically from scratch by Gulag prisoners and volunteers under the control of all-powerful Soviet Deputy Prime Minister Lavrenty Beria. A tough political regime would not tolerate any setbacks in testing the bomb.

The project was top secret. The construction site was called a "base," "office," and eventually Arzamas-16. The project's security and reliability required tough discipline. Nuclear scientists were given exclusive powers and access to huge funds. When they asked for gold and platinum to experiment with the intensity of neutron radiation, Beria ordered the manufacture of 60 kg plates. These plates were under permanent protection, and their return had to be guaranteed.

Not a single detail was neglected. Detonator capsules, which guaranteed simultaneous explosion of the neutron fuse, exploded with a maximum time interval of 0.2 microseconds. About 3,000 single and group detonations were carried to achieve the required result. Several sets were made for the bomb. Attention to the minutest detail was typical for all components of the RDS-1. All of them were made thoroughly to achieve their failsafe operation.

Everything was ready by August 1949. To study the destructive effects of the new weapon, about 50 aircraft, armor hardware, and more than 1,500 animals were brought to the testing ground. Houses of brick and wood, a bridge, and three stretches of pits at a depth of 10, 20, and 30 meters (simulating the metro) were built. The blaze and the roar from the explosion were registered even 80 km away from the testing ground, and the bomb itself proved to be 50% more effective than its rated capacity.

The Soviet Union had done it, and much quicker than America expected. It was also the first to test the hydrogen bomb and launch the first nuclear missile carrier, the first satellite, and the first cosmonaut. These achievements can hardly be called the inertia of enthusiasm, calculation, and a systemic approach.

One of the trickiest issues is whether this was a Soviet bomb or a replica of the American one. This is how head of KB-11 Yuly Khariton replied to this question: "We had to show in the quickest and most reliable way that we have also got nuclear weapons. More effective designs, which we had in mind, could wait." The authors of the book Soviet Atomic Project wrote that "unit 501," which actually copied the American invention, "was an objectively required minimum, dictated by political considerations." At the same time, as the last Soviet nuclear minister Lev Ryabev put it, it was not a replica but a creative quest that determined the effort to invent new technology and design, build new laboratory and industrial units, and adopt new calculation methods.

Soviet success in building the bomb has largely predetermined the world's existence without a global war. It launched an era of mutual vulnerability. As the great Khariton put it, "apparently, the greatest paradox of our time is that the most sophisticated weapons of mass destruction are facilitating the preservation of peace by being a powerful deterrent."

There were also other factors in curbing the forces of aggression apart from strategic parity with the United States, such as the position of nuclear scientists (Russell-Einstein manifesto on the inadmissibility of nuclear war, Pugwash movement documents, Andrei Sakharov's appeals, and the development of the nuclear winter concept).

By the beginning of the 21st century, the perspective of the nuclear apocalypse became more remote. Local conflicts and wars are being fought with precision weapons. Nuclear flagships - the United States and Russia - have embarked on the talks to reduce nuclear arsenals and delivery vehicles.