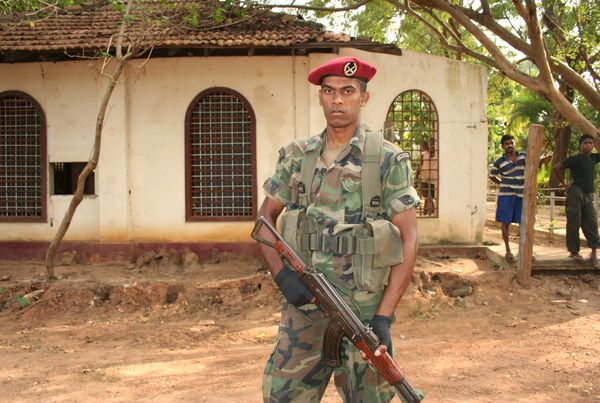 J.S. Tissainayagam was accused of receiving money for his on-line newspaper from the outlawed Tamil Tigers separatist group, violating the country's Prevention of Terrorism Act.

The Tamil Tigers were defeated by government forces in May, ending their three-decade battle for an independent state for Sri Lanka's Tamil minority.

Articles published by Tissainayagam in 2006 and 2007 were considered by the judge to create "communal disharmony." The reports criticized methods employed by the Sri Lankan government in its war against the Tamil Tiger rebels, including the withholding of food and other basic items from Tamil-majority areas.

The ethnic-Tamil reporter's arrest in March 2008 sparked a wave of protests among western human rights activists, who accused the Sri Lankan government of waging a crackdown on media freedom. U.S. President Barack Obama highlighted Tissainayagam's case as an example of journalists being oppressed for doing their jobs.

Prosecutors argued that Tissainayagam went too far in his writing.

"The constitution itself gives freedom of press, but that doesn't allow anybody to spread false information to spur ethnic violence," Sudarshana DeSilva told the court, Reuters reported.

A Sri Lankan journalist who knows Tissainayagam told RIA Novosti his articles mainly focused on social issues, including the problem of child soldiers, fighting for the rebels in the country's east.

"Of course, he had some links with the Tigers, but how could he write his articles without these links?" the journalist said.

The conviction marks the first time a journalist has been found guilty of violating Sri Lanka's anti-terror law.