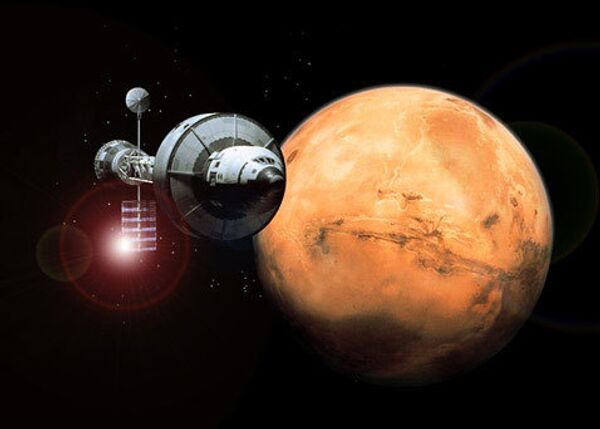 An international team should be involved in the manned mission to Mars and it should use the scientific achievements from the implementation of the International Space Station (ISS). The mission should be managed by NASA and Roskosmos, but also with the participation of other space agencies, said Bauman.

Today, the space program remains one of Russia's budget priorities and Russia is still one of the leading countries involved in multifaceted space operations. At the same time, Russia is experiencing a noticeable slowdown in cosmonautics and in its competitiveness in the space sector.

Many scientists and other experts hold that the large-scale task of a manned mission to Mars with subsequent establishment of a long-term outpost there is one of the priority vectors in space operations in first decades of the 21st century. In recent years, the number of unmanned spacecraft sent to Mars has grown steadily.

A Russian neutron detector installed on the U.S. space vehicle Mars Odyssey 2001 not only confirmed the presence of water on Mars in the first weeks of its operation, but found abundant water reserves there. Radar research from the European Space Agency's Mars-Express space vehicle showed that in the planet's southern polar regions alone, the ice deposits are such that if they melted and refroze, the entire planet would be covered in ice 11 meters thick. Moreover, some 100,000 years ago, i.e. when there was already intelligent life on Earth, the Martian ocean seems to have been in a liquid state.

Researchers working with the Mars-Express have made another, no less significant discovery. Using a Fourier spectrometer, which Russian experts participated in building, a significant quantity of methane was found in Mars's cloud layer. Incidentally, this gas could be of biological origin.

In the next few years, a network of small landing stations is planned for conducting climatic measurements and research of the planet's internal structure using seismic methodology. The next logical step would be a mission to retrieve Martian soil.

Today it is considered almost irrefutable that even though the natural environment on Mars significantly differs from that of Earth, it is still closer to Earth's environment than any other planet in the solar system. In essence, Mars is still the only planet with prospects for human habitation, but by all estimates, only in the distant future.

It is more than simply economic problems. Accomplishing a manned Mars mission requires a new level of technology, which is theoretically achievable.

Anatoly Koroteyev, president of the Russian Academy of Cosmonautics, is of the opinion that the key scientific and technical problem in creating a Mars mission system is development of qualitatively new propulsion and energy supplies with a high degree of energy-mass efficiency.

Today, options that are being explored are liquid-fuel rocket engines and nuclear jets with a high-power solar or nuclear energy plant. The latter option seems to be preferable.

Furthermore, the current capabilities of the Russian space industry are clearly insufficient for Russia to accomplish not only an independent manned mission to Mars, but to even conduct major programs to research and explore the Moon. This, of course, does not mean simply short-term missions with cosmonauts on the lunar surface for a few days, but setting up a consistently operating lunar base.

The situation could possibly change if structural changes took place in the rocket and space industry, changes that Prime Minister Vladimir Putin recently said needed to be accomplished as soon as possible.

Yuri Zaitsev is an academic advisor at the Russian Academy of Engineering Sciences.