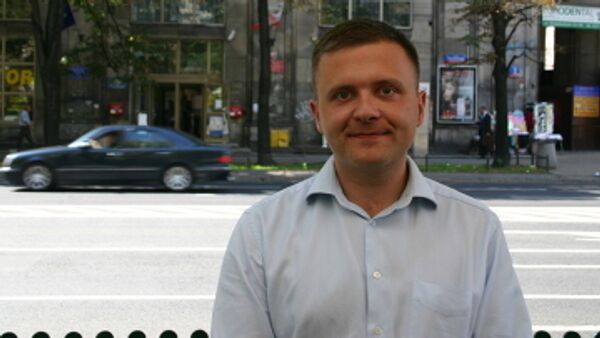 Subscribe
On September 1, it will be 70 years since the start of World War II, which began with Nazi Germany's attack on Poland. Now many Polish politicians are accusing the U.S.S.R. of complicity in unleashing the war. The Molotov-Ribbentrop Pact is called the cause of all Polish misfortunes.

On September 1, it will be 70 years since the start of World War II, which began with Nazi Germany's attack on Poland. Now many Polish politicians are accusing the U.S.S.R. of complicity in unleashing the war. The Molotov-Ribbentrop Pact is called the cause of all Polish misfortunes.

Should Russia apologize to Poland for this pact? Is the overtly anti-Russian tone of the Polish media an official line of the Polish Government? What about history textbooks? How can we go over from perpetual reflections and an incessant search for historical truth to the resolution of urgent economic issues?

Director of the European Center of Geopolitical Analysis Mateusz Piskorski answers these questions in an interview with RIA Novosti correspondent in Central and Eastern Europe Leonid Sviridov.

Question: The Polish press is carrying a lot of publications today accusing Russia of complicity in unleashing World War II. Is this just the typical anti-Russian tone of the Polish media, or the official line of the Polish Government?

Answer: This year is special for Poland in the context of recent history. I would like to note the following. On September 1, Prime Minister Vladimir Putin will finally visit Poland, for the first time in seven years. This means that Polish-Russian relations may be "defrosted." There are some overtly Russophobic forces in Poland. It is particularly important for those forces to worsen the atmosphere on the eve of the 70th anniversary of the start of WWII because the Russian prime minister is going to arrive in Gdansk.

Indeed, in the past few months, the press has carried many publications designed to evoke a sharp response from Russia. Once Russia responds, the authors of these publications will try to convince the Polish public that Moscow does not respect Poland's view, and ignores historical facts.

I would not attribute these publications to the official or unofficial line of Donald Tusk's Government. It is paying much less attention to what is called historical policy than the previous cabinet of Jaroslaw Kaczynski.

There are hardly any downright Russophobes among the members of the government, except for, maybe, Polish Foreign Minister Radoslaw Sikorski, whose position compels him to tone down his once emotional approach. You may remember that he called the North European gas pipeline along the bottom of the Baltic Sea (Nord Stream) the new Molotov-Ribbentrop Pact.

The part of the right-wing political spectrum, which wants the Poles to be scared by Russia, would like to see the atmosphere change for the worse on the eve of September 1. This group is strong enough and expresses its views in the Rzeczpospolita newspaper, and in the Wprost and Gazeta Polska weeklies. However, this does not mean that all Polish media are markedly anti-Russian.

Q: What do you think about the Molotov-Ribbentrop Pact signed on August 23, 1939?

A: Any assessments of this pact should rely on the facts confirmed by the archives, just as an analysis of different scenarios for 1939. For Poland, this pact was unequivocally negative, although it would have sustained a much bigger loss of life if the entire territory of the Second Rzeczpospolita had been controlled by Nazi Germany.

Since its formation, the Soviet Union was trying to break out of the isolation imposed on it by the West. Neither London, nor Paris evinced interest in Moscow's proposals in 1939. From the point of view of the U.S.S.R., under the circumstances, the Molotov-Ribbentrop Pact was a good solution.

Q: Should Russia apologize to Poland for this pact?

A: It is my conviction that any apologies for political and diplomatic solutions made 70 years ago are pointless. Only those who signed the pact could apologize for it.

Today, any apologies could encourage the opponents of good Russian-Polish relations to further "exploits." They would immediately dismiss such apologies as too "weak." They would say that the Russian authorities have not fully recognized all their mistakes and should ask for repentance over and over again.

I think that instead of making apologies, it would be much more important to invite Polish historians to cooperation, and to make a joint publication on the pact and the circumstances of its conclusion.

A: Usually, this amounts to a media provocation. First, some Polish journalist finds "scandalous assertions" in some third-rate Russian publication after a long search, and writes an article, quoting them out of context. A Russophobic Polish politician reads this article and stages a big row. In turn, other media start spinning this spiral, and all politicians start expressing their views on this subject.

It would be naive to think that Polish politicians spend their free time reading Russian textbooks.

Q: How great are the differences in the assessment of historical facts between Russia and Poland?

A: Their views on the events of our common history will always differ substantially. We should bear in mind that in our part of Europe there were only two powers - Russia, which remains a power to this day, and Poland, which was a power in 1569-1648, and which repeatedly tried to retrieve this status later on.

Thus, history is very important for both Russians and Poles. They will always assess differently the events of 1920, the Molotov-Ribbentrop Pact, and the post-1945 period.

Historians usually see a horizon determined by their national self-identification. Therefore, few scholars are able to accept the rational arguments of their opponents, and to refrain from looking at history through the prism of their emotions, and often, the history of their own families.

But we need objective historians. That is exactly why we must set up bilateral groups of scholars, in which each side will try to understand the different views of the other.

Q: All too often Poland exploits historical facts for current domestic political purposes. What are the chances that the Polish government will finally leave history to historians and focus on the pragmatic resolution of economic issues?

A: I hope that this is exactly what will finally happen. In 2005-2007, Poland decided to pursue historical policy, that is, to subjugate historical science to current interests and political games. I believe that this attitude is not negative per se because sometimes historical self-identity and interpretation of events are important for national interests. However, this was harmful for Polish-Russian relations at a time, when groups with Russophobic views prevailed in the Polish government.

I believe, therefore, that Russia and Poland should joint hands and show our nations what brings us together and what united us historically. It is possible to find interesting positions, concepts and personalities even in the difficult relations of the 20th century.

Positive historical policy could become a foundation for good and even strategic contacts between our two countries.

Q: What should Moscow and Warsaw do to resolve historical problems?

A: They should start showing positive examples of cooperation. It is good that Russia has set up a presidential commission on countering attempts to falsify history to the detriment of Russia's interests. Its Chairman Sergei Naryshkin makes highly rational statements.

However, it would be good if in analyzing the activities of those who revise history, Russia would point to the common threats that are a consequence of attempts by many post-Soviet states to form national self-identity not only by discrediting Russia for no reason, but also by criticizing Poland.

This applies to the conduct of Ukrainian nationalists who, acting under the banner of Stepan Bandera, have gathered in the political camp around President Viktor Yushchenko. Latvian Waffen SS soldiers, who are now being applauded in Riga, killed not only Russians but also Poles in Wal Pomorski, where they burnt several dozen people alive in the village of Podgaj.

It will take a great deal of time and effort to change the consciousness of people and historical policy. This may be a task for research institutes, research centers and NGOs. However, it is important to realize that success in this effort can never be achieved without government support.