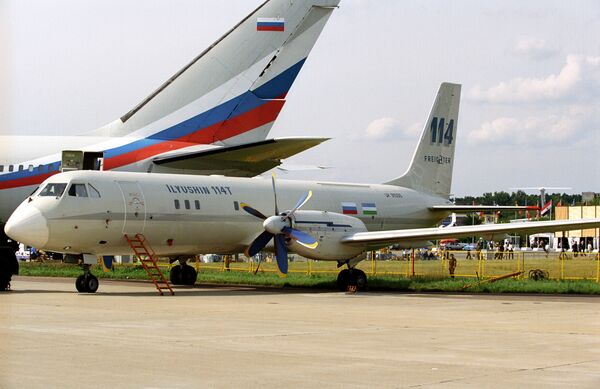 MOSCOW. (RIA Novosti military commentator Ilya Kramnik) - During the MAKS air show, this commentator had an opportunity to interview a high-ranking Russian aviation official, who described the current situation at Ilyushin, a major Russian engineering-design bureau specializing in transport and passenger planes.

Ilyushin-designed aircraft are used extensively in Russian military and civil aviation. These include the Il-96-300, the largest Russian passenger airliner; the Il-86 medium-haul wide-bodied airliner; the Il-76, the workhorse of military transport aviation which spawned the Il-78 flying tankers; the A-50 early warning aircraft; the Il-20 and Il-22 flying command centers and retranslators, and the Il-38 submarine hunters.

Currently, Ilyushin is actively working to re-equip Russian aviation. Before 2015, the Defense Ministry plans to purchase 38 new Il-76MD-90A aircraft, also known as the Il-476. Work is under way to upgrade the Air Force's Il-76MD planes, which are being fitted with PS-90A-76 engines. Before 2015, more than half of the 119 Il-76s in service with the Air Force must be replaced with new models, or upgraded. The source said that apart from the Defense Ministry, civilian airlines are also interested in new planes, for example, the freight carrier Volga-Dnepr, which is planning to purchase Il-76s with the new engines.

Il-20 flying command centers, Il-22 retranslator planes, and Il-38 anti-submarine aircraft based on the popular Il-18 model developed in the 1950s play an important role in the Air Force and in maritime aviation. Despite their advanced age, these planes are reliable and economical, and their service life can be extended with proper maintenance and upgrades. According to the source, the plan is to increase their service life to 60 years, which will see them operate into the late 2020s. These measures are not unique. The 21st century threatens to be an era of old age aircraft in many countries.

Apart from upgrading old aircraft, the next few years will see new Ilyushin planes plying the skies. At the end of 2010, the newest Il-112V military transport plane is expected to make its maiden flight, with production scheduled for 2012. In the Air Force and in civilian airlines it will replace the An-26 light transports, which are now obsolete.

The year 2013 is expected to see the first flight of the Il-214, the medium-range military-transport plane, developed jointly by Russia and India. The Il-214 will see production in 2015-16. This aircraft, capable of carrying 20 tons, is scheduled to replace the An-12, a veteran that went out of production in 1973.

The Il-214 will be a technological cousin of the Il-76. It will have two instead of four engines and a shorter body. As requested by the Indian Air Force, the plane will be capable of taking off from alpine airfields (up to 3,000 meters) and be tropical heat capable.

The source said a decision was made to stop upgrading the Il-96-300 long-haul wide-bodied airliner, but that production will continue on a limited scale. There is still a need for this plane - at least among air units that carry top-ranking officials. Foreign-made aircraft or planes having too many foreign components cannot be employed for such purposes. This policy is evident in the recent refusal of the Administrative Directorate of the President to use the Sukhoi Superjet in favor of the Russian-Ukrainian An-148.

The interview confirmed the general impression this reporter had of MAKS-2009: Russia's aviation industry has bottomed out and today companies have a clear understanding of their goals and objectives. What is more, these goals and objectives are already being translated into hard metal - or prototype designs and subsequent production.