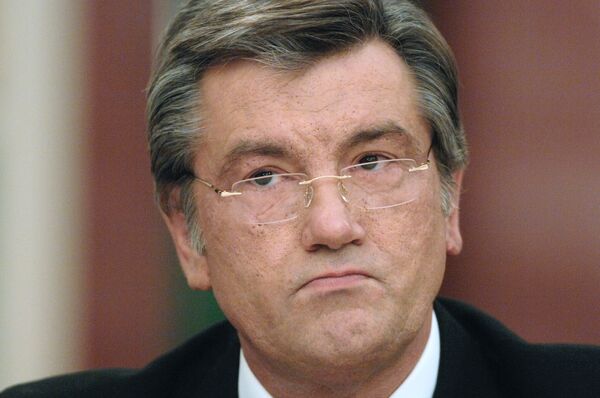 In an open letter to his Ukrainian counterpart on August 11, Medvedev blamed Kiev for the deterioration in relations between the two former Soviet republics, strained in recent years by gas disputes, Ukraine's desire to join NATO, and interpretations of the Soviet-era famine in Ukraine.

"I don't know how many times I've turned to the president of the Russian Federation and to the Russian government in regard to improving dialogue and improving Ukrainian-Russian relations," Yushchenko said during a press conference in central Ukraine's Poltava region.

Two days after Medvedev's letter, Yushchenko said he was disappointed in the Russian president's position.

"To be frank, I am very disappointed by [the letter's] unfriendly nature," Yushchenko replied. "I agree that relations between our countries face major problems, but I find it strange that you totally rule out any responsibility for them on Russia's side."

At a news conference after talks with the German leader, Angela Merkel, at his residence in the Black Sea resort of Sochi last week, Medvedev reiterated that relations between Russia and Ukraine had "worsened drastically."

"I do not think Russia is to blame," the Russian leader said.

Moscow has delayed the arrival of its new ambassador's arrival to Ukraine to protest Kiev's policies, a move criticized by Yushchenko as unhelpful.

Yushchenko's entreaties could fall on deaf ears, however, as Medvedev signaled last week that Russia was waiting for new leadership in Ukraine, where Yushchenko is polling in the single digits ahead of presidential elections scheduled for January 17.

"I hope that a new Ukrainian leadership will have significantly more opportunities to improve relations. Russia wants this, and it is a top priority for our foreign policy," Medvedev said.