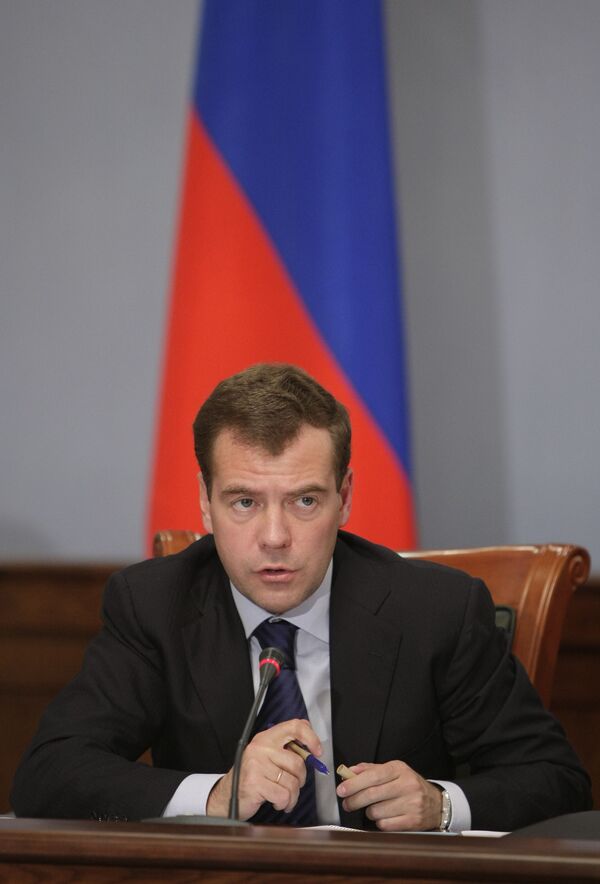 © POOL
/
Go to the photo bank
Subscribe
Russia's president said on Wednesday that law enforcement chiefs at all levels would be taken to task if they fail to ensure the safety of police officers.

STAVROPOL, August 19 (RIA Novosti) - Russia's president said on Wednesday that law enforcement chiefs at all levels would be taken to task if they fail to ensure the safety of police officers.

Twenty-four officers were killed and 136 people injured on Monday when a suicide bomber rammed an explosives-laden minivan into the gate of police headquarters in Nazran, the largest city of the volatile Russian republic of Ingushetia, which borders on Chechnya,.

"Chiefs of any rank will be taken to task, or even fired, for failing to provide such [security] measures," Dmitry Medvedev told participants at a security conference on the North Caucasus.

Following the Nazran attack, the worst violence in the republic for several years, Medvedev sacked Ingushetia's interior minister and ordered a probe into the police activities.

He urged measures as soon as possible to provide comprehensive protection for the police, including additional insurance and new equipment.

"The wellbeing of millions of citizens depends on how they [police officers] are protected," the Russian leader said.

Medvedev pledged more efforts to tighten security in the North Caucasus and said the fight against terrorism should be carried out without any emotion or hesitation.

"All these crimes committed of late against Ingush leaders, police chiefs, civilians and human rights activists should be inevitably punished," the Russian president said.

Ingushetia's construction minister was gunned down in his office last Wednesday. The murder followed the killing of a Supreme Court judge and the attempted assassination of the republic's president, Yunus-Bek Yevkurov, in late June. The Ingush forensic chief was also killed last month.

Zarema Sadulayeva, 32, of Let's Save the Generation, an organization working with children affected by the Chechnya conflicts, and her husband, Alik Dzhabrailov, 33, who also worked for the group, were kidnapped on August 10 and found dead in the trunk of their car the next day. Both had been shot in the head and chest.

Another human rights activist in Chechnya, Natalya Estemirova, was abducted and shot dead in similar circumstances in July.