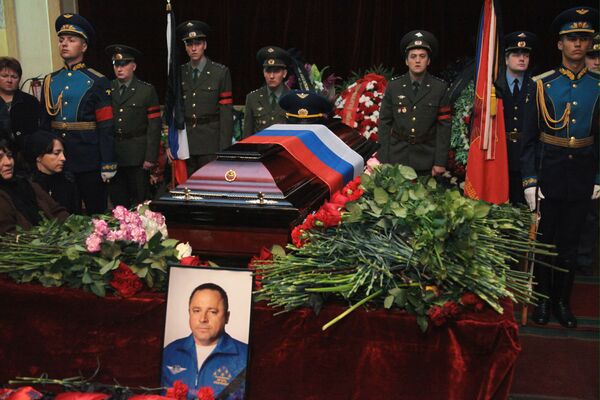 © RIA Novosti . Ruslan Krivobok
/
Go to the photo bank
Subscribe
Several thousand people gathered in a garrison town west of Moscow on Wednesday to pay their last respects to the commander of a famed Russian aerobatic group who died in a midair collision on Sunday.

KUBINKA, August 19 (RIA Novosti) - Several thousand people gathered in a garrison town west of Moscow on Wednesday to pay their last respects to the commander of a famed Russian aerobatic group who died in a midair collision on Sunday.

The memorial service for Col. Igor Tkachenko began in Kubinka at 10:00 a.m. and was due to finish by midday, but was extended as people continued to arrive despite the damp, chilly weather.

Tkachenko was killed, and two other pilots injured, in a midair collision involving two Su-27 fighters on Sunday during a rehearsal for aerobatic performances at the MAKS air show in Moscow.

Among the relatives, friends and colleagues mourning the pilot were members of a biker club, the Night Wolves.

"He was a close friend of ours," club president Alexander Zaldastanov, known as Surgeon, said. "We were close in our spirit and character. We lost a friend and the country lost a top pilot."

The coffin is to be taken to Nikolskoye cemetery, northwest of Moscow, which is a resting place for many of Russia's military pilots, including those killed in Vietnam in the 1960s-1970s.

The Russkiye Vityazi, or Russian Knights, team led by Tkachenko was formed in April 1991 and is manned by elite pilots from the Kubinka Airbase near Moscow.

The group made its foreign debut in September 1991, in Britain. Since then, the Russian Knights have become a regular feature at major air shows all over the world. They also perform at Victory Day parades on Red Square.

The Knights withdrew from the Moscow international air show, which opened on Tuesday, following the tragedy.

All three pilots ejected, and two of them were later found on the ground in a serious condition. Tkachenko was killed as his parachute reportedly caught fire in mid air. Five civilians were also injured.

Tkachenko, who was 45, is survived by his wife, a daughter and a son, who is a fifth-year student at an Air Force college.