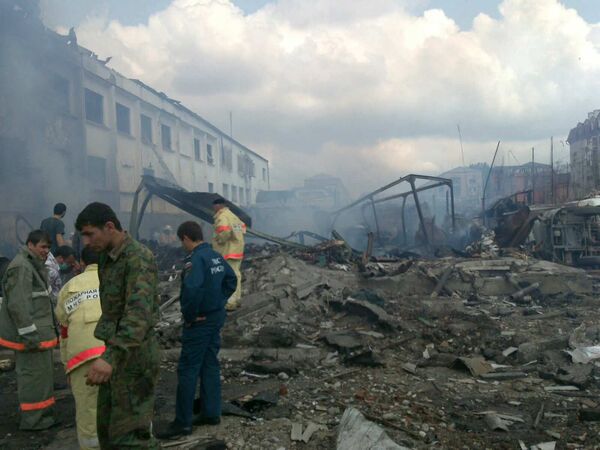 Emergencies officials said on Monday that at least 20 people were killed and 138, including 10 children, injured in an attack by a suicide bomber in southern Russia's Ingushetia.

ROSTOV-ON-DON/MOSCOW, August 17 (RIA Novosti) - Emergencies officials said on Monday that at least 20 people were killed and 138, including 10 children, injured in an attack by a suicide bomber in southern Russia's Ingushetia.

Earlier on Monday, a suicide bomber rammed an explosives-laden minivan into the gates of the police headquarters in the republic's largest city Nazran. The blast damaged the police building and nearby blocks of flats.

Local emergencies officials working at the scene fear that the death toll could rise further as at least 20 people are believed to be trapped under the rubble of the police building.

"The precise number of people who might be under the rubble is not known. We believe there could be some 20 people there. Search efforts are continuing," an emergencies ministry official said on the telephone.

He said the search had only just begun as the building was engulfed in fire immediately after the explosion.

The official said 16 victims are in critical condition and are being transported to Moscow.

The explosion left a crater about 4 meters wide and 2 meters deep. The blast triggered more explosions as ammunition detonated in the police headquarters.

The blast shattered windows and smashed balconies in residential buildings within a radius of 500 meters. Some 30 cars parked nearby were destroyed, Russian media reported.

Ingush authorities have announced three-days' of mourning in the republic and pledged to pay 100,000-ruble ($3,000) and 50,000-ruble ($1,500) in compensation to the families of those killed and injured, respectively, media reports said.

Russia's Emergency Situations Ministry has dispatched a plane to Ingushetia carrying medical specialists and aid for the victims.

Russia's mainly Muslim North Caucasus regions have seen a rise in violence in recent months. Attacks on police, officials and troops have been reported almost daily in Ingushetia and neighboring Dagestan that border Chechnya, which saw two separatist wars in the late 1990s-early 2000s. However, today's attack is the worst for many years in Ingushetia.

Ingushetia's construction minister was gunned down in his office last Wednesday. The murder followed the killing of a Supreme Court judge and the attempted assassination of the republic's president, Yunus-Bek Yevkurov, in late June. Last month the Ingush forensic chief was also gunned down.

Russian President Dmitry Medvedev has called the increased terrorist activity in the Caucasus "an attempt to destabilize the situation in the region."