A sad opening to MAKS 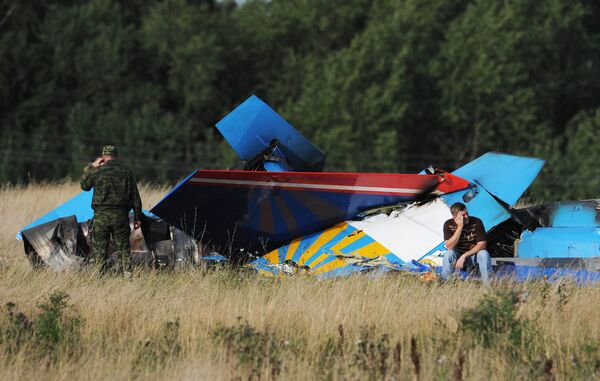 MOSCOW. (RIA Novosti military commentator Ilya Kramnik) - On Sunday, August 16, a Su-27 fighter jet and a two-seater Su-27UB from the air group Russian Knights collided in mid-air while training for the air show MAKS 2009. The disaster took place in the skies above Zhukovsky.

All three pilots ejected, but one of them - group commander Colonel Igor Tkachenko - died. One more pilot received a spinal injury. Several people were hurt on the ground: one of the planes fell on a village, leaving three houses in flames. Three people (or four, according to other sources) were taken to hospital with non-severe burns.

The causes of the disaster have yet to be established. Hearsay reports point to a pilot error - in performing a maneuver, the planes moved too close to each other and collided. A technical malfunction has not been ruled out either.

The main question is how the disaster will affect the air show. On Sunday evening, several media outlets reported that the Russian Air Force would not cancel its performance at MAKS 2009, and that all three groups - the Swifts, Russian Knights and Falcons of Russia - will fly as scheduled. But on Monday morning, it was reported that their flights might be canceled over fears that the Lvov disaster of 2002 might be repeated. Then, a Su-27 of the Ukrainian flying team fell to the ground during an air show, killing many spectators.

Such a step is unlikely to be justified. The chance of such an accident is always present at such events; the tragedy will not increase or decrease the degree of risk at this MAKS or any other show. An automatic response to call off the performance is in this case unlikely to be the best way out.

Added to this, the performance of the air groups at the show could be the best demonstration of readiness to absorb the blow and the best memory for the Russian Knights commander.

The death of Colonel Igor Tkachenko, commander of the 237th Center for Display of Aviation, has been a serious blow not only to the Russian Knights, but also to the Russian Air Force as a whole. He had a career of 24 years in the air and logged more than 2300 flying hours on jet fighters of various types. He finished the Borisoglebsk pilot school in 1985, and has been flying aerobatics since 1989.

The causes of his death also need to be established. He ejected from his cockpit, but for some reason this did not save him. Some information sources note that a few spectators saw a flaming parachute, most likely Tkachenko's. If the cause was the ejector's failure, then it would suggest that the commander perished because of obsolete equipment: the group's aircraft were manufactured in the 1980s-1990s.

But whatever the cause of the collision and Tkachenko's death, renewal of the Air Force and flying groups stands as an increasingly urgent task. Otherwise, increased hours flown by Air Force pilots on old aircraft will only increase the accident rate as a result of failures. Let us remember that the Russian Air Force now operates 2,700 aircraft and helicopters whose average age is 25 years.