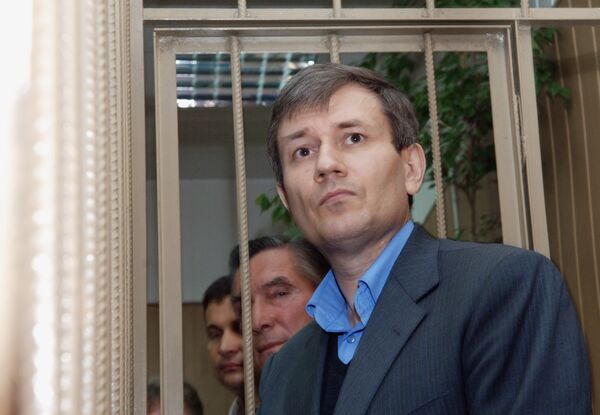 RIA Novosti continues its six part investigation into Russian sects and fringe beliefs with a look at self-proclaimed messiah Grigory Grabovoi, jailed on fraud charges in 2008.

MOSCOW, August 17 (Marc Bennetts for RIA Novosti) - Dressed in an anonymous dark suit and tie of the type favoured by harassed office workers the world over, the slightly nervous middle-aged man frowns and turns on his computer's camera.

He clears his throat, wipes an expression that could be interpreted as anything from nerves to boredom off his face and begins to speak.

The clip, easy to find on the Internet, is comical and in some ways a little sad. For anyone who is unfamiliar with the name, Grabovoi seems like a most unsuccessful and unlikely would-be messiah, severely lacking in charisma and guru-appeal.

However, this self-proclaimed leader of men is at the centre of one of the most bizarre stories to have come out of modern Russia.

Although he had been in the resurrection business for some time, Grabovoi made the headlines all over Russia in 2005 after allegedly promising to bring back to life, for some $1,500 a corpse, the 186 children killed when Chechen separatists seized school number one in Beslan, an incident often referred to as Russia's 9/11.

Media reports claimed that the "Second Coming" and his political organization - the very Clockwork-Orange sounding Drugg - regularly held "healing sessions" in Moscow with members of the Mothers of Beslan, a group formed by bereaved parents from the tragic North Caucasus town.

"I believe in this miracle and I know that it will come about," one of the group's founding members, Susanna Dudiyeva, told a gathering of Grabovoi's followers in the Cosmos hotel in north Moscow. "My maternal instinct tells me this, my maternal faith."

"I want my child back, and I will believe in anything to get him," Zalina Guburova, who lost her 9-year-old son in the attack, told Russia's NTV.

Public outrage, whipped up by both the broadsheets and the tabloids, grew and Grabovoi was eventually arrested in 2006 after a sting operation carried out by Moscow journalist Vladimir Vorsobin, from the Komsomolskaya Pravda daily.

Vorsobin appealed to Grabovoi to resurrect his fictional step-brother, whose "photograph" was complied from different images by the paper's art department.

After Vorsobin had handed over the cash, he was informed that his "step-brother" had been resurrected and was leading a happy life somewhere near St. Petersburg.

Grabovoi was subsequently detained and, after the paper appealed for other people who had been conned to come forward, eventually charged and jailed on 11 charges of fraud in July 2008. His 11-year sentence was later cut to eight on appeal.

While the Grabovoi affair may seem like a one-off aberration, the meeting of the complex nature of Russian politics and the country's fondness for the supernatural, the concept of the physical resurrection of the dead through science has strong roots in Russian 19th and 20th century history.

Nikolai Fedorov, 1828-1903, was a Moscow-based ascetic philosopher who, despite not publishing anything in his lifetime, was cited by both Leo Tolstoy and Fyodor Dostoyevsky as a major influence. Fedorov, who preferred to disseminate his ideas orally, was convinced that the resurrection of the dead was scientifically possible, and that it was also humanity's moral duty to undertake this task. Mankind, the celibate thinker maintained, was the tool nature had chosen to resolve its greatest flaw, i.e. death.

In order to do this, Fedorov suggested, scientists would have to search for the atoms of all the world's dead and then reassemble them. The final day of this resurrection "project" would see Adam and Eve reborn in the Pamirs, the central Asian mountain range that he considered the site of the biblical Garden of Eden.

An official Soviet manifesto released the year before Lenin's death in 1924 had declared with typical revolutionary fervor that, "Mankind will be eternal!" After Lenin's death, the Biocosmists-Immortalists also published a statement in the state-run Izvestiya newspaper that consoled the bereaved nation with the thought that the workers of the world "would not be reconciled" with the passing away of the father of the Revolution and would not rest until he was resurrected in all his glory.

Representatives of Grabovoi's Drugg organization declined to be interviewed for this article.