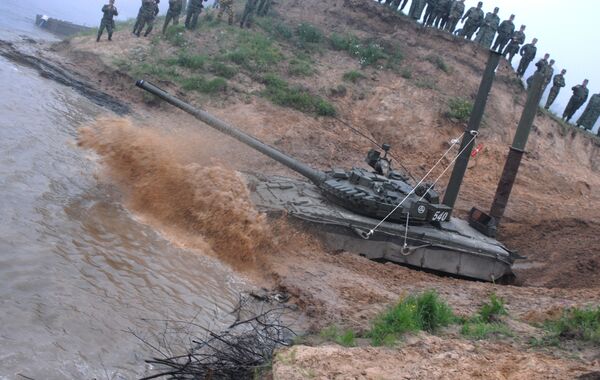 MOSCOW, August 17 (RIA Novosti) - Russia and Libya have signed a contract to overhaul at least 145 T-72 Russian-made battle tanks in service with the Libyan Army, a senior government official said on Monday.

Moscow and Tripoli have been involved in talks on the modernization of the T-72 tanks since 2006 as part of renewed efforts to revive bilateral military-technical cooperation.

"Work has been conducted in the Libyan direction, and we have already made headway after signing a number of contracts with the country over the past year, including on the modernization of T-72 tanks," Konstantin Biryulin, deputy head of the Federal Service for Military-Technical Cooperation, said in an interview with RIA Novosti.

The official said talks on Russian arms deliveries to Libya are underway, but refused to disclose any details of the future contracts due to their confidential nature.

"I do not want to help our competitors in their work [on the Libyan arms market]," Biryulin said.

Russia has encountered tough competition with Western nations in arms sales to Tripoli since the UN lifted sanctions against Libya in 2003, when the Libyan president announced he would halt the country's nuclear weapons program and accepted responsibility for the 1998 terrorist bombing over Lockerbie in Scotland, agreeing to pay compensation to the victims' families.

Libya was one of the largest buyers of Russian-made armaments in the second half of the 20th century. Tripoli has acquired from the Soviet Union more than 2,000 tanks, 2,000 armored infantry fighting vehicles and armored personnel carriers, about 450 self-propelled artillery pieces, as well as a number of combat aircraft and large quantities of small arms since the beginning of the 1970s.

Konstantin Makiyenko, deputy director of the Russian Center for Strategic and Technological Analysis, said last year that future Russian arms contracts with Libya could be worth up to $4 billion, and include the total overhaul of Libya's obsolete arsenal of tanks.

"In particular, over 100 T-72s require an urgent overhaul, and the same refers to the T-62, T-55 and T-54 tanks, which constitute the backbone of the Libyan Army," the analyst said.