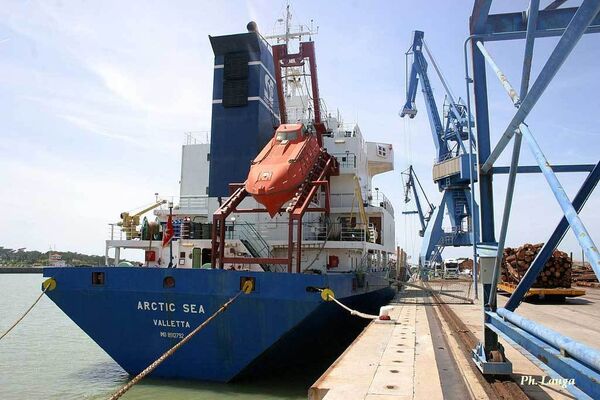 © Sovfreight
Subscribe
The Russian frigate Ladny is heading toward Cape Verde in the western Atlantic in search of the missing Arctic Sea cargo vessel, the Russian ambassador in Cape Verde said on Friday.

MOSCOW, August 14 (RIA Novosti) - The Russian frigate Ladny is heading toward Cape Verde in the western Atlantic in search of the missing Arctic Sea cargo vessel, the Russian ambassador in Cape Verde said on Friday.

The Arctic Sea, which is operated by Solchart Arkhangelsk Ltd and has a 15-member Russian crew on board, is feared to have been hijacked. It was last reported by German media to be traced to an area northwest of the island of Santo Antao, Cape Verde's second-largest port.

"I have a report from the Russian Navy that the frigate is going to enter Cape Verde territorial waters," Alexander Karpushin told the Russian News Service. "The warship has its own search plan."

The ship last made radio contact with British coastguards on July 28. According to Interpol the ship was briefly seized in the Baltic Sea by masked men claiming to be police on July 24. Reports state that after 12 hours the men left the ship and the Arctic Sea resumed its voyage.

Some media have speculated the ship could have been targeted because it was carrying an "unknown cargo" in addition to timber. However, the ship operator called the reports "rubbish."