Newborn twins in Abkhazia 'named' in honor of Russian leaders 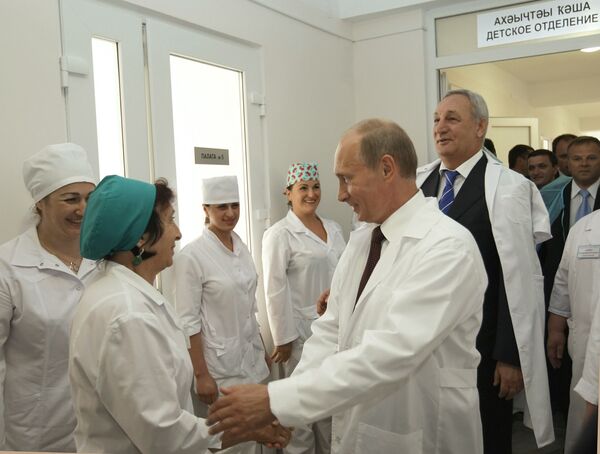 © RIA Novosti . Aleksey Nikolskyi
/
Go to the photo bank
Subscribe
Russian Prime Minister Vladimir Putin on Wednesday visited a new maternity hospital in the former Georgian republic of Abkhazia when a set of twins was born.

SUKHUMI, August 12 (RIA Novosti) - Russian Prime Minister Vladimir Putin on Wednesday visited a new maternity hospital in the former Georgian republic of Abkhazia when a set of twins was born.

The hospital's chief doctor, Liana Achba, met both Putin and Abkhaz President Sergei Bagapsh at the hospital with the news that just two minutes before they had arrived, twin boys were born and the employees had "named" them Vladimir and Dmitry, the latter in respect to Russian President Dmitry Medvedev.

Medvedev and Putin are frequently referred to in media as a political tandem government.

It was not known what names the twins' parents might give their new offspring.

Abcha said the maternity hospital had just opened on Monday after being completely refurbished using financial aid from the Russian government.

The building was originally a neurologic hospital but was completely destroyed in the 1992-1993 war with Georgia. The maternity hospital is the largest in Abkhazia and can house 100 mothers.

This is the first visit of a high-level Russian delegation to the republic, which Russia recognized as an independent state last August after a five-day war with Georgia over breakaway South Ossetia, which Moscow also recognized as independent.

Prior to the visit, Putin also said Russia would allocate 15-16 billion rubles (over $465 million) in 2010 to strengthen Abkhazian borders, frontier troops and bases.