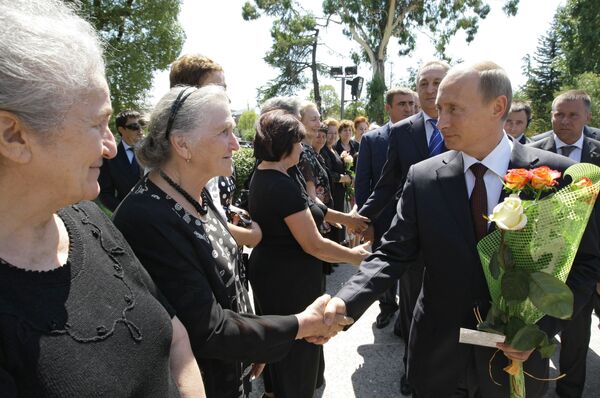 It is the first visit of a high-level Russian delegation to the republic, which Russia recognized as an independent state last August after a five-day war with Georgia over breakaway South Ossetia, which Moscow also recognized as independent.

Meeting with Abkhazian President Sergei Bagapsh, Putin reiterated that despite major cuts in the federal budget triggered by the ongoing economic crisis, the level of financial assistance to Abkhazia would not change.

"The funds agreed on for three years have been earmarked," Putin said.

Prior to the visit, Putin also said Russia would allocate 15-16 billion rubles (over $465 million) in 2010 to strengthen Abkhazian borders, frontier troops and bases.

Tensions have been high in border areas between the regions and Georgia, fueling fears of a new conflict.

Russia has maintained peacekeepers in the regions since the bloody post-Soviet conflicts in the early 1990s, when Abkhazia and South Ossetia broke away from Georgia. It deployed more troops there after the war with Georgia, which attacked South Ossetia to regain control of it.

Nicaragua has been the only other country to recognize Abkhazia and South Ossetia. The West condemned Russia's "excessive" use of force against the Caucasus state and recognition of the territories. Moscow accused Western powers of supporting Georgian aggression.

In an interview ahead of the visit, Putin said he had last visited Abkhazia in Soviet times, when its Black Sea resorts were a popular holiday destination. He said he had earned money as part of a student labor brigade and "bought an overcoat, which I wore for 15 years."