The bombing did not start in five minutes 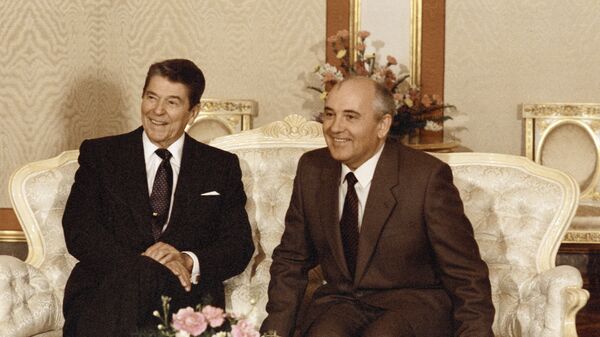 © Sputnik / Yuryi Abramochkin
/
Go to the photo bank
Subscribe
MOSCOW. (RIA Novosti political commentator Dmitry Kosyrev) - This happened in a different world, which today seems a fairy tale to some and a horror story to others.

MOSCOW. (RIA Novosti political commentator Dmitry Kosyrev) - This happened in a different world, which today seems a fairy tale to some and a horror story to others.

Twenty five years ago, on August 11, 1984, US President Ronald Reagan made a joke, which was included into all encyclopedias and history text-books of the 20th century all over the world. He said: "My fellow Americans, I'm pleased to tell you today that I've signed legislation that will outlaw Russia forever. We begin bombing in five minutes."

It goes without saying that well-wishers tried to tell the whole world about this joke, including Soviet leaders headed by Konstantin Chernenko.

When Reagan made this joke it became clear again that the Soviet Union would not last long. Soviet propaganda reacted to Reagan's sound check in its usual gloomy and senile manner. Ideological battles cannot be won without a sense of humor.

Reagan had an astoundingly low, velvet, and deep voice. Using it, he must have solved half of the task - to return self-respect to America, and help it stand up from its knees.

To understand Reagan's role, it is necessary to realize what America was like before he came to power in 1980.

In the middle 1970s, America was defeated in Indochina, and not only by Vietnam, but also by world communism, which helped Vietnam. Society in America was split because it was primarily defeated from within by millions of people who did not want to join the army and kill the Vietnamese. The drive of social and other protests in the 1970s engendered the great American art which makes current Hollywood films look like a caricature. Long-haired peace campaigners scored a total victory over the previous generation of heroes which overcame the Great Depression and defeated Hitler.

Former actor Reagan won the elections and sided with the part of America which had already saw itself defeated.

The word "actor" is of key importance here. Reagan did not earn much fame in Hollywood, but he brilliantly played the role of a strong American president. His joke about the bombing is easy to explain. He simply imitated one of his former cowboy heroes. Every actor knows how it feels before coming on stage.

Reagan's political initiatives are rooted in Hollywood. He spoke and scared others more than he bombed. His military service record includes only invasion of the tiny Grenada in October 1983.

Having lost his memory to Alzheimer's disease long before his death in 2004, Reagan did not see how George W. Bush turned the repetition of his experiment into farce. What happened with America, if we judge its history in the 2000s by Reagan's yardstick? Needless to say, Bush imitated Reagan, especially in words (the Axis of Evil), but lacked his restraint in deeds. By that time, Russia was rising from its knees itself, almost repeating what America did in the early 1980s, and was not scared of Bush. China was reaching its international goals by being persistent and reserved. Also at that time, the delayed mine, planted by the same Reagan (with his liberal Reaganomics) exploded, and the American economic model began to show signs of strain. U.S. society split again, and Reagan's ideology was wiped off the scene for a long time.

But the long-haired generation of the 1970s became a thing of the past. As distinct from Bush's America, Obama's America is something quite different. It does not yet have a clear idea of what it represents. This vagueness is making our world interesting. This is a world, in which nobody will joke about bombing in five minutes.