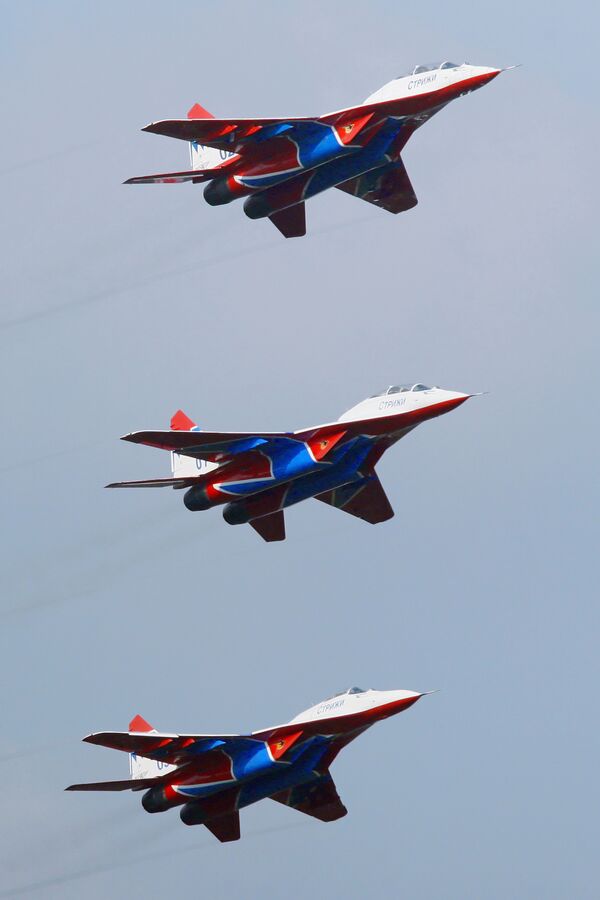 New and modernized aircraft will comprise 70% of the Russian Air Force by 2020, the Air Force commander said on Wednesday.

MOSCOW, August 5 (RIA Novosti) - New and modernized aircraft will comprise 70% of the Russian Air Force by 2020, the Air Force commander said on Wednesday.

"We expect 70% of the Air Force strength to be new and modernized aircraft by 2020," Col. Gen. Alexander Zelin told reporters.

"The development of the Russian Air Force will be carried out through extensive acquisition of new advanced aircraft and continuing modernization of the existing fleet," he added.

According to Zelin, Tu-95MC Bear and Tu-160 Blackjack bombers, Tu-22M3 Backfire long-range bombers and Il-78 Midas aerial tankers will form the backbone of the Russian strategic aviation in the next decade following extensive modernization.

The bombers, in particular, will be equipped with new targeting and navigation systems, which will enable them, in particular, to use conventional unguided bombs with a very high degree of accuracy - effectively engaging any target within 20 meters.

They will also have their operational range increased and their onboard defense systems significantly upgraded, the general said.

In addition, Zelin said Russia had been developing a fifth-generation strategic bomber which could be used effectively in both conventional and nuclear conflicts.

"The new plane will use a wide selection of high-precision weapons, and will have a whole range of new combat capabilities, allowing it to apply new methods to carrying out deterrence tasks," he said.

Russia will also develop in the near future a number of advanced reconnaissance aircraft including a stratospheric plane capable of avoiding enemy air defenses.

"Ultra-high altitude reconnaissance planes will play a key role in future wars because they will be capable of staying in the air for a long time and conduct reconnaissance operations deep into enemy territory while avoiding hostile air defenses," the Air Force commander said.

Zelin said the Air Force will receive in the next decade not only modernized Su-27SM and MiG-29SMT fighters, but also generation 4++ Su-35S Flanker-E and MiG-35C Fulcrum-F fighters.

"The Russian Defense Ministry will start purchasing large numbers of these aircraft at the beginning of the next decade," the general said.

Meanwhile, Russia's fifth-generation multirole fighter is being developed by the Sukhoi aircraft maker, part of the United Aircraft Corporation (UAC), along with India's Hindustan Aeronautics Limited (HAL), under a preliminary intergovernmental agreement signed in October 2007.

"Flight tests of the [fifth-generation] aircraft are scheduled to start in the second half of 2009, and the aircraft is expected be put into service in the next few years," the commander said.

The An-26 plane will be replaced by Il-112B light transport aircraft with higher payload capacity and better fuel efficiency.

"The first Il-112 is expected to make its maiden flight in 2011. The Air Force will order over 70 planes of this type," the general said.

The An-12 will be most likely replaced by a medium-haul transport plane jointly-developed by Russia and India, Zelin said.

The plane, with a 20-ton cargo capacity, is expected to go in service with the Russian and Indian air forces in about eight years.

"We have started deliveries of Mi-28N helicopters to combat units [in the North Caucasus military district] and plan to re-equip at least one squadron with these aircraft by the yearend," Zelin said.

"We are also expecting to complete the tests of the Ka-52 helicopter this year," he added.

The Ka-52 is a twin-seat derivative of the Ka-50 Hokum-A attack helicopter, and is designed primarily for reconnaissance and target designation purposes. It is similar to the U.S. AH-64 Apache attack helicopter.

The unmanned aerial vehicles (UAV) will start playing an increasingly important role in future combat. Given their much lower manufacturing and maintenance costs they could form as much as 40% of the Air Force fleet by 2025, Zelin said.

The Air Force will start receiving domestically-developed attack UAVs in 2011.

"Unmanned and manned aircraft will complement one another, and must be able to accomplish a full range of combat missions in regional or local conflicts," the general said.