Egyptian researchers claim to have exact date for Great Pyramid 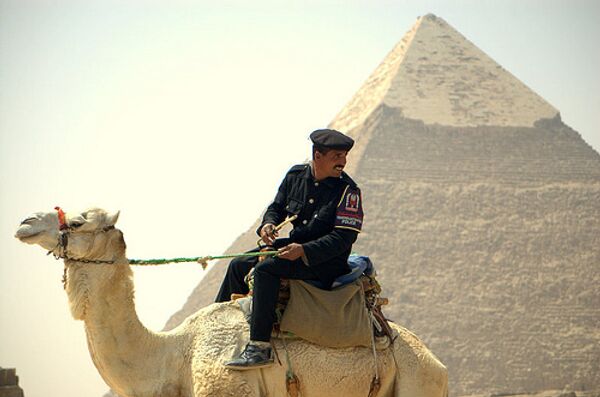 CAIRO, August 4 (RIA Novosti) - A group of Egyptian researchers claims to have hit on an exact date for the construction of Khufu's pyramid, the largest of the three Great Pyramids at Giza.

The team, led by Dr. Abdel-Halim Nureddin, says work on the pyramid was started on 23 August, 2470 BC. The local governor told reporters that the date will now be celebrated as National Giza Day.

The claim was immediately dismissed by the country's leading Egyptologist, Dr. Zahi Hawass, along with Kamal Wahid, general director of the Giza necropolis, who said the year can only be approximated.

They did not comment on why the "exact" date found by the research team for the start of construction appeared to be almost a century later than the approximate date for the pyramid's completion accepted by most Egyptologists - 2560 BC.

However, Giza Governor Sayyed Abdel Aziz, who organized the research project, stood by the team's findings. He said the work was carried out "under conditions of strict secrecy, to ensure the exactness of the research."

He said Khufu's pyramid will now become a symbol for the province, and will feature on its emblem.

Egyptologists generally avoid putting precise Gregorian Calendar dates on events in the country's pharaonic past, due to the different way in which the ancient calendar worked.

Egyptians counted years from the inauguration of each pharaoh, meaning that with each new king the calendar would be reset to zero. As no single document exists listing all the pharaohs from first to last, and due to the breaks in the record when the land was disunited (the intermediate periods), most dates can only be approximated to the nearest decade, or several decades.

The Great Pyramid of Khufu (also known by the Greek version of his name, Cheops), is one of three colossal pyramids built by successive Old Kingdom pharaohs, at a time when the country was at the peak of its power, and intensely centralized, giving the rulers a level of control not enjoyed by those of later periods.

The three pyramids were initially cased in polished white limestone, that ancient witnesses said would give off a blinding light in the hot desert sun that could be seen from vast distances.

Ironically, the only surviving likeness of the great pharaoh who created the tallest pyramid is a hand-sized sculpture, now standing in a glass case in the Egyptian Museum in Cairo.