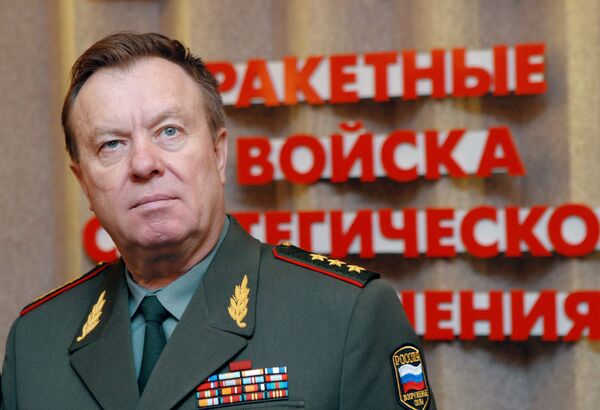 Solovtsov is reported to have been discharged from military service on reaching the mandatory retirement age of 60. His replacement Shvaichenko, 56, was first appointed deputy SMF commander and SMF chief of staff in 2001.

Solovtsov became SMF commander in 2001. In December 2008 he turned 60, the retirement age for military commanders at the rank of colonel general.

Some Western media sources, however, have linked his dismissal to a series of embarrassing failed test-launches of the troubled Bulava ballistic missile, as well as disagreements over Russia's controversial military reforms.

Pavel Felgengauer, a military commentator, said there was nothing unusual about Solovtsov's dismissal on reaching the age of retirement, adding that the Bulava was part of the country's naval component and had nothing to do with the SMF.

Viktor Baranets, another Russian military commentator, also said he doubted whether his discharge had anything to do with the Bulava, but suggested that Solovtsov could have caused a potential "difficult" situation for the Kremlin as it negotiates a new strategic arms deal with the United States.

At their summit last month Dmitry Medvedev and President Barack Obama called for a reduction in the number of nuclear warheads to 1,500-1,675 within seven years.

But Solovtsov was on record as saying that it would be unacceptable to go below 1,500 warheads.

Baranets said Russia "did not yield an inch" during Obama's Moscow visit and that Solovtsov "was on the team of people who upheld the position of our SMF."

He said the Kremlin may have been worried by Solovtsov's inflexibility and so replaced him with a man who "is blindly loyal to the Kremlin."