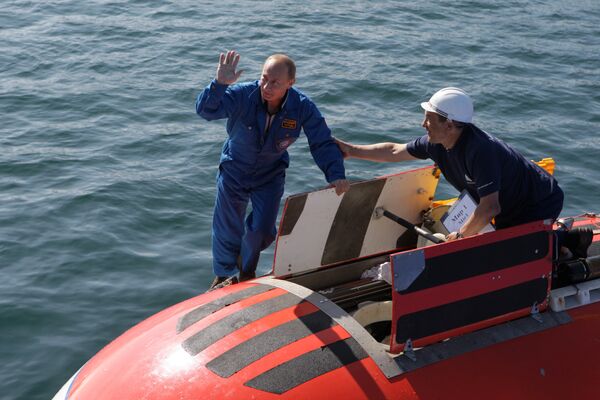 Russian Prime Minister Vladimir Putin has made a dive to the bottom of the world's deepest lake, Baikal, in the Mir-1 mini-submarine.

BAIKAL, August 1 (RIA Novosti) - Russian Prime Minister Vladimir Putin has made a dive to the bottom of the world's deepest lake, Baikal, in the Mir-1 mini-submarine.

Putin, clad in overalls for a 4-hour plunge, spoke to journalists on a radio linkup from the deepest point of the lake's southern part 1,395 meters below the surface, saying he was surprised that the water was not transparent and calling it "a plankton soup."

In his Saturday's dive, the premier, who on Friday set up a satellite transmitter on a white whale during a visit to Russia's Far East Khabarovsk Territory, was accompanied by submersible pilot Viktor Nishcheta and Anatoly Sagalevich, the head of an Oceanology Institute laboratory.

Such activities by Putin, 56, have won him popular support, especially among women: he has piloted a bomber, traveled inside submarines and driven various vehicles.

The Mir-1 and Mir-2 mini-subs involved in research in Siberia's Lake Baikal performed 52 dives last summer. They resumed work in June to monitor the southern part of the lake, near Cape Tolsty, with plans to conduct research in the lake's central and northern parts as well.